Boundary between dream and reality

There was a face rising above the floor with a head looking like a water drop defying the power of gravity. It appeared to be a familiar expression that you might have encountered in your dream. Taking a closer look, it was a round face with different shapes.

An exhibition hall on B2 at Storage. There is something familiar, yet dreamlike about it as it was the intentions of the artists to make visitors feel like they are in a dream.

But this is not a dream. It is what you can see when you walk into the exhibition 〈OSGEMEOS: You Are My Guest〉 at Hyundai Card Storage, an exhibition space located in Itaewon, Seoul. Designed to re-interpret the indigenous Brazilian culture, the exhibition represented the boundary between the dream and the reality in a diverse spectrum of works, which include paintings, sculptures, installations, videos and among others. The duo’s lyrical stories, unique characters and hyper-realistic installations show the world of unconsciousness with their own persona

Hyundai Card Storage hosts 〈OSGEMEOS: You Are My Guest〉. The exhibition starts from July 15th to October 11th.

OSGEMEOS invites you to the surreal world.

Meaning “twins” in Portuguese, OSGEMEOS is an artist duo with twin brothers, Gustavo Pandolfo and Otavio Pandolfo. Having started out as graffiti artists in Sao Paulo, they emerge as a rising star on the global art scene. With unique characters and style, they are sending profound messages to the world.

The duo was supposed to visit South Korea for their first exhibition in the country, but they couldn’t. As the Brazilian government imposed travel restrictions since the outbreak of the COVID-19 pandemic, the graffiti work and other scheduled art projects were all been cancelled. OSGEMEOS, however, gave their own ideas even about the display to make sure make sure every piece of works be shown in a perfect manner. “OSGEMEOS got involved in the every aspect of the exhibition, including the designs of exhibition staff uniforms,” said Hyundai Card official.

〈My Lima Orange Tree〉. A figure with open arms on a colorful background seems to welcome visitors. (Left)
A yellow-faced figure with long and lean arms and legs represents a universal human being beyond race and culture. (Right) 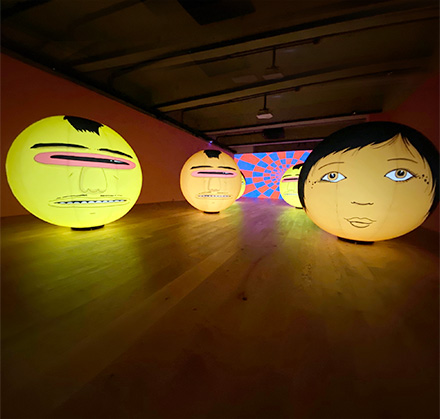 〈Planets〉 displayed on B3 of Storage. There is something friendly, yet dreamlike about it as it was the intentions of the artists to make visitors feel like they are in the dream

OSGEMEOS’ works often feature different images, which allow us to explore the relationship between the human beings and the nature. You can find a good example in 〈My Lima Orange Tree〉. A human grows out of a tree stump as if it were a plant and its eyebrows and hair are green just like tree leaves. It shows humans and nature are all connected as one.

One of OSGEMEOS’ remarkable features are the way they depict human beings . Yellow-faced figures with thin and long arms and legs are their signature style. One can find those figures not only in their street art works, but also in their paintings. They are OSGEMEOS’s persona and a metaphorical representation of universal human beings at the same time.

This character was subject matter for the OSGEMEOS exhibition at Hyundai Card Storage. The duo created human heads and faces to make them look like gigantic balloons. This work is titled 〈Planets〉. It looks like the two-dimensional characters sticking out in the three-dimensional space. Both male and female characters are lightening up the dark exhibition hall –as if they are floating in the space.

Consisting of 134 small and large objects, 〈Thinking〉 is a large installation established on the entire wall of B3 exhibition hall at Hyundai Card Storage. It encompasses Brazilian folk art crafts, such as wooden dolls with different sizes and shapes, various decorative pieces in diverse colors, abandoned mirrors, human portraits and among others etc. These are actually OSGEMEOS’s own collections that they have bought from antiques shops in person for a long period of time. You can guess what has inspired the duo to come up with motifs in their paintings or sculptures. Each object exists as an independent art piece, but it has been recreated as combined artwork.

〈Thinking〉 mixing the traditional Brazilian culture and the pop culture in the 80-90s consists of 134 small and big objects. It is a stylish archive of artworks and collections of the duo who grew up in Brazil which is a multiethnic country known for its cultural mosaic.

Music has always been OSGEMEOS’ important source of inspiration. When they visited South Korea to discuss their exhibition at Storage last year, they were highly satisfied with Hyundai Card Vinyl & Plastic and purchased a few records from South Korean musicians. We can hope OSGEMEOS work can be inspired by South Korean musicians someday. In fact, there was OSGEMEOS’s work influenced by the Brazilian music. OSGEMEOS has worked with Brazilian pop musicians and to rework their album covers in the 1980s.The colors, strokes, languages and other elements used for the highlight, or humorously modify, those album’s original images.

This piece consisting of Brazilian musicians’ album covers in the 1980s allows you to see the Brazilian pop culture that OSGEMEOS grew up together. They are OSGEMEOS’s source of inspiration.

OSGEMEOS said they have put together this exhibition to make the visitors think they are walking into the spiritual planet and that they wanted to share their dreams with those enjoying their works. They also expressed hopes that the visitors can have unique, fun experience, like floating in the exhibition hall.

Socar and Hyundai Card partner for a credit card