“A great library cannot be constructed. It is the growth of ages.”

It is a saying by Scottish historian John Hill Burton in his book “The Book Hunter.” Whereas a book is a fraction of records, a library has the records piled up over time.

For this reason, libraries have gone beyond being a space where books are collected. They have played a role as a social legacy with heaps of knowledge and wisdom of the past generations.

According to Umberto Eco, a philosopher and novelist, a tribe in Africa used to say a library has put on fire when a senior passed away. The expression probably comes from the fact that both seniors and libraries hold memories or records of the past.

Hyundai Card tried to adhere to the essential role of libraries – accumulating records – over the course of opening four libraries since 2013, each themed on design, travel, music and cooking.

Some of the crucial collections include Life, Domus and Playboy. Life is effectively synonymous with the history of photojournalism since its first issue published in 1936. Domus is recognized for raising the bar of discussion on architecture and design. Playboy has been depicting social scenes of each era in a provocative manner, going beyond just being a conventional adult magazine.

Other collections that should not be missed include National Geographic, which is dubbed “journal of the earth” as it has been recording the history of the earth since 1888, when its first issue was published. Rolling Stone is another example. It has solidified its position as the world’s No. 1 pop music magazine, dealing not only with music but also society, culture and politics.

Some Complete Collections are rarities domestically as well as globally. Life stopped publishing in 2000 and now is issued irregularly in the form of special issues. Even Penske Media Corp., publisher of Rolling Stone, does not even own the Complete Collection. That means only at Hyundai Card libraries can you meet some historical moments.

Turning the pages of Complete Collection from the initial to the latest issue, you will find some scenes from the past unfolding right in front of your eyes as if you were time travelling.

Life ran the photo of a U.S. Navy sailor embracing and kissing a stranger nurse in its special issue marking the end of war with Japan, published in August 1945. Photographer Alfred Eisenstaedt took the photo entitled “VJ Day in Times Square” on the Victory over Japan Day, making even the generation that has never gone through a war feel the joy of seeing the war end.

Life was tantamount to the messenger that delivered the moments of the present to the following generation – from the initial issue featuring Fort Peck Dam, symbol of the controversial New Deal in 1936 to the August 1969 issue, which ran the photo on the cover of the moment the first human Moon landing. 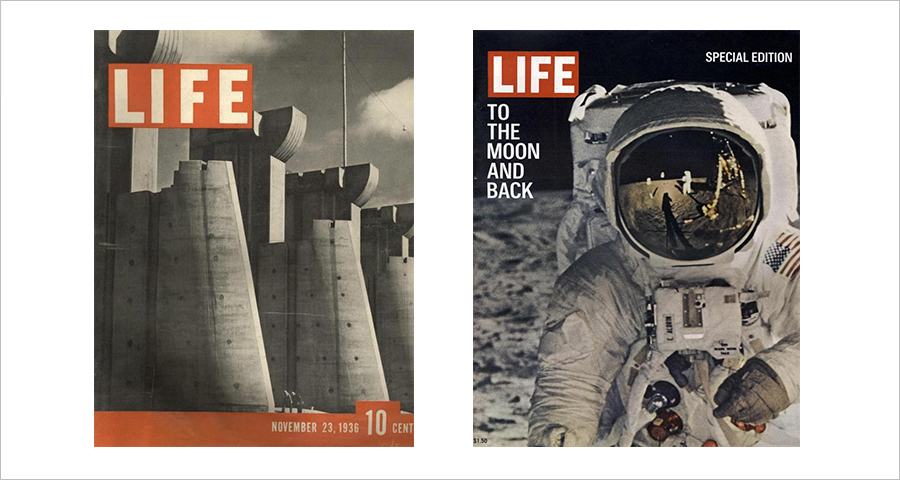 (Left) The first issue of Life, which picked the photo of Fort Peck Dam, the symbol of the controversial New Deal.
(Right) Special edition of Life featuring the first human landing on the Moon, issued in August 1969.

Playboy once declared it would not feature nude pictures amid criticism that it objectified women but the magazine is considered to have contributed to the history of sexual revolution by relentlessly raising questions about social prejudice against women.

The first issue of Rolling Stone, one of two leading music magazines in the United States alongside Billboard, featured the Beatles’ John Lennon for its cover. The famous anti-war activist was at the time shooting a film, “How I won the War,” a black comedy on the Ward War II.

“Rolling Stone is not just about music, but the things and attitudes that music embraces,” said Jann Wenner, founder of Rolling Stone and Rock and Roll Hall of Fame, in the first issue of the magazine. Choosing John Lennon for the cover of the initial edition reflected the publisher’s comments.

The magazine raised its foothold by going so far as to represent the spirit of the younger generation that protested against older generation by covering the Free Speech Movement, a massive and student moment which took place on the campus of University of California, Berkeley in 1964 in its April 1969 issue. In September of the same year, Woodstock Music and Art Fair 1969, the centerpiece of hippie counterculture represented by anti-war, peace and love. 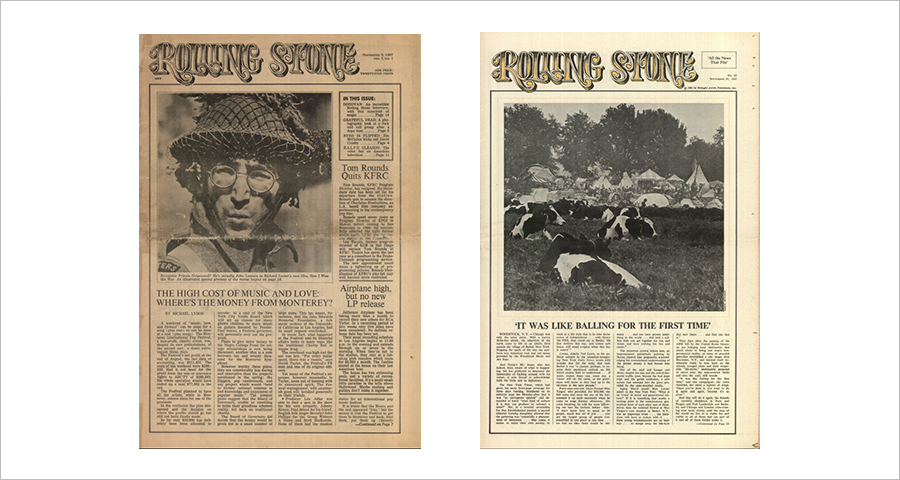 (Left) The first issue of Rolling Stone featured the Beatles’ John Lennon for its cover. The famous anti-war activist was at the time shooting a black comedy film on the Ward War II, showing that the magazine was meant to deal with not only pop music but also the society, culture and politics.
(Right) Rolling Stone’s Issue No. 42, published in September 1969, dealt with the Woodstock Music and Art Fair 1969, which ran August 15-18, 1969. It shows the hippie counterculture at its peak.

No matter how certain records are, they may end up remaining the legacy of the past unless people of the present do not try to look them up. Hyundai Card has been unveiling special content on the Complete Collection on Hyundai Card DIVE mobile app since March 11. Hyundai Card libraries will add a tap introducing the collection on its homepage at the end of March.

“We plan to introduce a variety of content on Complete Collection for visitors to easily access, going one step further from just owning the collection,” said a manager in charge of Hyundai Card libraries. “We hope that visitors will meet the historical moments at the libraries that they were not able to experience.” 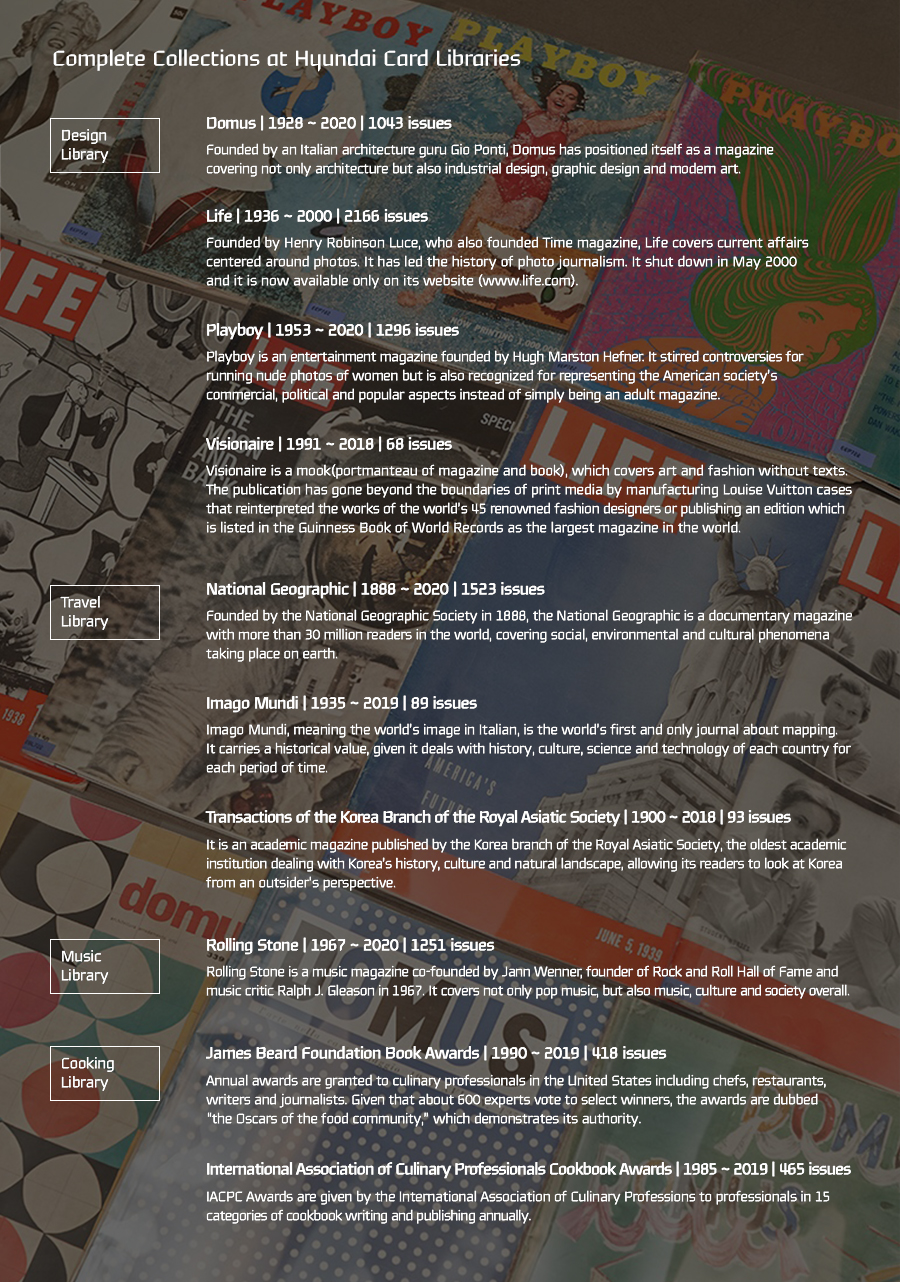