“All about cheese” at Hyundai Card Cooking Library

In “Tom and Jerry,” an American classic cartoon, Jerry, a mouse, constantly tries to steal cheese from the cat Tom’s owner. In one episode, Jerry carries away a piece of Emmental cheese bigger than the size of his body from fridge on his back, while his natural enemy Tom keeps adding heavy objects on the cheese without Jerry knowing. In another, Jerry eventually succeeds in taking away a piece of cheese from a cupboard while Tom is asleep and gulps down the cheese to his happiest moment.

Do mice really love cheese? According to various studies, they don’t. In a 2015 BBC TV show “Winterwatch,” cheese, peanuts and grapes were placed in an outdoor environment where mice frequented. Observation showed that no mouse headed to cheese, while the majority of visitors opted for peanuts.

According to Park Ye-sol, associate at the Hyundai Card Cooking Library, the conventional belief that mice like to eat cheese came from the past tradition in the West of preserving food at the kitchen. People cared more about grains and meat than cheese, which raised the chance for mice to get in touch with cheese. As mice were spotted with cheese more frequently than with other foodstuff, people naturally came to conclusion that mice love cheese. Scientific research also showed that mice, a rodent species, love sweets much more. 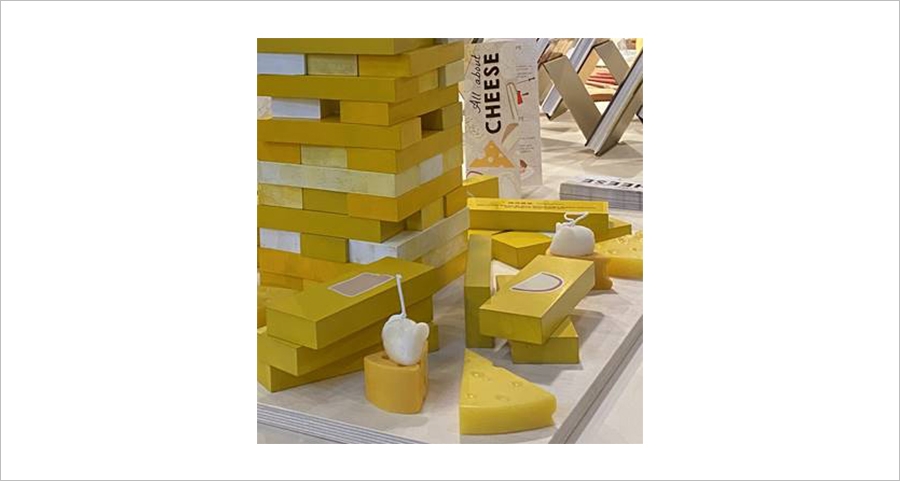 Eat, play and learn about cheese

Despite the untruthful myth about mice and cheese, it’s hard not to associate the former with the latter. Marking the Year of the Rat, Hyundai Card Cooking Library named cheese as a foodstuff theme for its periodic event and has been staging various programs and exhibitions centered around cheese since December 2019.

Since the theme was named, the library transformed into a cheese theme park. At the entrance of the first floor, a huge illustration wall themed on “Cheese of the World” is installed to explain different types of cheese according to countries of origin. From a cart right next to the wall, visitors may try various cheese – from Gruyere to Gouda and Mimolette. Slices of bread with Gruyere on it can be toasted with a sleek Balmuda toaster for tasting.

(from left) Various cheese products are for sale at Deli. Cheese-themed dishes are available as well.

At the library on the second floor are on display a variety of books on cheese recipes and artisan cheese recommended by experts as well as cheese knives and tools – serving board, knife, grater, slicer, fondue forks and girolle. Cheese to demonstrate how the tools are used can also be found.

Noteworthy among them is a type of Swiss cheese “Tete de Moine,” translated literally as “monk’s head” for its shape. It is prepared in a unique way of being scraped with an apparatus called girolle to produce thin shavings that look like flower leaves. The semi-hard cheese boasts silky texture and fruity and nutty aroma, pairing well with red wines. It also goes well with salad.

(from left) On display at the library on the second floor are books and tools on cheese. Tete de Moine, being scraped with girolle.

The age of ‘cheese aficionados’

In tandem with the trend of more people interested in wine, coffee and beer, interest in cheese has been rising. According to Anthony Cho, owner chef of “Cheese Flo” in Hannam-dong, Seoul and cheese artisan, cheese has a huge realm to explore for its lovers to keep studying just as wine, coffe and beer do.

“Cheese is an ideal ingredient to use at cafes, houses and restaurants and goes well with various beverages and drinks such as wine, Korean drinks and beer,” said Cho. “It is such an attractive ingredient that it has a lot of potential to develop according to how you use it.”

He added that interest in cheese types has recently been migrating from processed cheese such as cheese with dried fruit, Cheddar slice, smoked cheese and cheese cubes to natural cheese.

Hyundai Card Cooking Library has been hosting various events for cheese lovers and those who want to dig deeper into cheese. On Jan. 16, Chef Anthony Cho led “homemade cheese-making” class and a “cheese talk” is scheduled on Feb. 26 by Kim So-young (also known as Soyoung Scanlan), a cheese artisan running “Andante Dairy” cheese shop in San Francisco. In March, a cheese tasting class by “Fromage,” a Seoul-based cheese institute, is scheduled. Further details including booking information can be found on Hyundai Card’s DIVE app.

As cheese grows more popular, the types of cheese imported has increased and an increasing number of Korean farms have been producing their own cheese products. But choosing from hundreds of types isn’t easy.

Natural cheese Chef Cho recommends
▶Burrata : Its flavor and texture makes it easy to approach the cheese even for cheese novices. It comes together very easily as a salad with various vegetables. Taste is a priority when it comes to using cheese but how easy it is to use it for food is also crucial.
▶Brillat Savarin : Koreans would find the soft ripened triple cream cheese favorable. Serving it with baguette or sour dough, topped with apple or apricot jam, brings heavenly taste, even more so with chilled white wine.

Parasite is born to be honest, says Bong