A series of stay-home performances for digital natives

Ten artists filmed themselves playing the piano in private places such as their own house for 20 to 30 minutes. Rudolf Buchbinder, a renowned Beethoven specialist who was originally scheduled to perform at “2020 Tongyeong International Music Festival” on March 29, ended up playing Beethoven’s “Diabelli Variations” at his home, not Tongyeong. Daniil Trifonov, one of young rising stars including Seongjin Cho wore a facemask and gloves and performed Bach’s “The Art of Fugue” without taking off the mask all along. The hashtag that Deutsche Grammophon added to its live streaming performances was #StayAtHome.

Online performances in the wake of COVID-19 outbreak

While everyone is trying to practice social distancing to stop the spread of COVID-19, limit to genres and country borders have been gone after concerts and performances became available on smartphones or tablets to reduce the distance between artists and audience know no borders or genres. The Metropolitan Opera in New York City has been offering “Nightly Met Opera Streams” starting mid last month. The streaming service available on the Met website (www.metopera.org) for 23 hours a day in HD presentations offers free encore live streams of performances that the Met has produced for the last 14 years such as “Carmen,” “Il Barbiere di Siviglia,” and “Aida.” 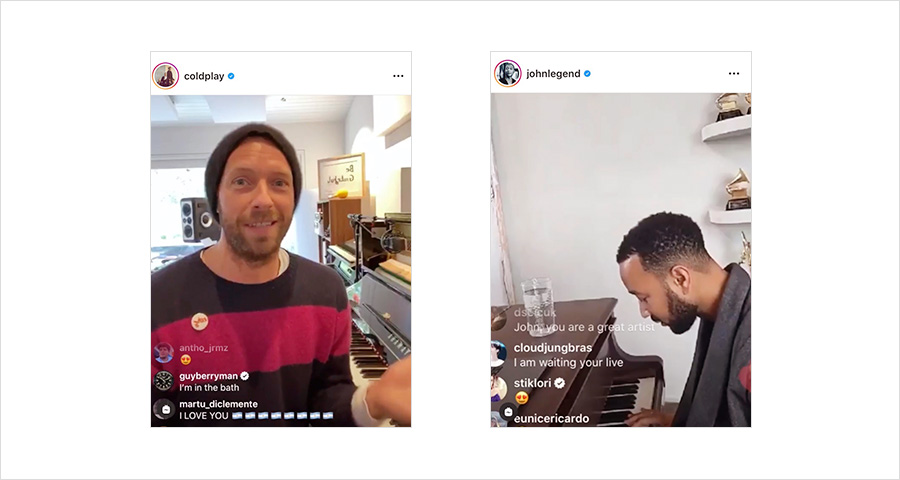 Coldplay frontman Chris Martin live streamed a surprising 30-minute performance on his Instagram on March 16 (GMT). “I was supposed to be with the band Coldplay today from which I come but they are stuck in different countries, so we can’t play together,” he said at the beginning of the stream. He sang Coldplay classics including “Yellow” and “Viva La Vida,” playing the piano on his own.

American R&B singer-song writer John Legend followed suit and streamed a live concert on Instagram for an hour the next day, saying “Social distancing is important, but that does not mean that it has to be boring.” The artists performed for the “Together At Home (#TogetherAtHome)” campaign, which encourages people to practice social distancing and combat coronavirus.

“Indoor concert” hosted by a reality TV show on MBC “Hangout with Yoo” invited artists whose concerts were canceled in the wake of the COVID-19 pandemic to perform without any audience and was well-received by not only its viewers, but also the live music industry which is suffering from a series of cancellations.
(Source = “Hangout with Yoo” on MBC screen capture)

Domestically a reality TV show on MBC “Hangout with Yoo” has been hosting a series of indoor concerts, inviting artists whose concerts were canceled in the wake of the COVID-19 pandemic to perform without any audience. Lee Seung-hwan, Zico, Song Ga-in, Jannabi as well as performers of the musical “Mamma Mia!” performed at the indoor concerts, offering solace to people and giving a boost to the live music industry that has been suffering from a chain of cancellations.

It may be too much of a luxury to find ways to watch a concert at home when the pandemic is threatening our life. But if you look back on the history, human being never stopped singing and dancing when the war or the Great Depression swept the world. By seeing beautiful things, people heal themselves and make sure everyone is connected.

It is hard to say that online concert trend originated from the spread of COVID-19. There have been attempts to meet “more” and “newer” audience by overcoming barriers such as costs before. Recent series of live-stream concerts offer virtual reality videos using 360° cameras and behind-the-scene videos, which are not available in actual concerts.

Since March 30, Soul Arts Center has been live-streaming its past performances including the ballet “Shimchung,” the musical “L”Homme qui rit,” “Paik Kun-woo Piano Recital” and many others. The videos were filmed initially for a project called “SAC On Screen” in 2013. This is the first time that Seoul Arts Center live-streams its performances on YouTube. Even before, the arts center used to play its video-recorded performances in local cultural centers in regions with weaker cultural infrastructure.

Berliner Philharmoniker unleashed an online video streaming service, “Digital Concert Hall,” in 2008. After the coronavirus outbreak, the organization has been offering the service free of charge for a month. If it were not for the effort to archive hundreds of performances, interviews with artists, commentaries, documentaries or other diverse content for the last 12 years, this opportunity would have been unavailable.

Changes have been spotted with not only concert industry but also companies that have been managing and promoting products and services. Notably, Hyundai Card, which has been credited with changing the landscape of concert culture in the country with its “Hyundai Card Super Concert” since 2007 is poised to launch three rounds of “Supermarket Concert” starting from April 19.

Supermarket Concert is part of campaigns to promote “Hyundai Card DIGITAL LOVER,” a new credit card the company unveiled in February. A digital single titled “Digital Lover,” written and sung by K-pop musician Crush, was released upon the launch of DIGITAL LOVER card, and Jessi, Gray and Kang Min-kyeong will rearrange the song in their own way and perform in front of small supermarkets in Seoul.

“Homebound Live,” where musicians such as Gray, Jessi and Kang Min-keyong sing “Digital Lover” either from their home or studio is a new way of concert befitting the lifestyle of customers owning “Hyundai Card DIGITAL LOVER.” DIGITAL LOVER is for people who prefer to stay at home without any contact with other human being.

DIGITAL LOVER is for digital natives who prefer to stay home and refrain from contacts with other human being. Streaming “Homebound Live,” in which three musicians sing from their home or studio in casual outfits prior to Supermarket Concert lies in a similar context. Hyundai Card sympathizes with the new lifestyle of those digital natives.

“Supermarket Concert and Homebound Live started from our understanding of the lifestyle of customers who have their own universe just as DIGITAL LOVER did,” said a Hyundai Card spokesperson. “We hope that Supermarket Concert will not be the only alternative available for customers who can’t manage go to actual concerts, but a totally new way for people who try to enjoy their digital life in their own way.”