The Museum of Modern Art, the cradle of modern and contemporary art in midtown Manhattan, New York City, reopened on October 21.

The Museum of Modern Art, the cradle of modern and contemporary art in midtown Manhattan, New York City, reopened on October 21.

The reopening came after closure over the summer for the last phase of its renovation project, just in time for the celebration of the institution’s 90th anniversary this year.

About 450 million dollars (526.8 billion won) went to the “expanded and reimagined” Museum of Modern Art, aimed at re-energizing and expanding upon its founding mission: sharing the most thought-provoking modern and contemporary art of our time with the world. MoMA’s campus now spans 165,000 square feet, up about 30 percent from the original size of 125,000 square feet.

The new MoMA has also stepped up its diversity of artists it features – from female artists to African American artists. At the same time, the institution doubled down on its commitment to time-based projects by creating a dedicated space and programming for media and performance art. Visitors will be able to transition between spaces of contemplation and ones that provide a much more experimental and participatory experience.

The Kravis Studio will host eight to 10 exhibitions and about 200 performances a year, including the current inaugural presentation “David Tudor and Composers Inside Electronics Inc. Rainforest V (variation 1).” 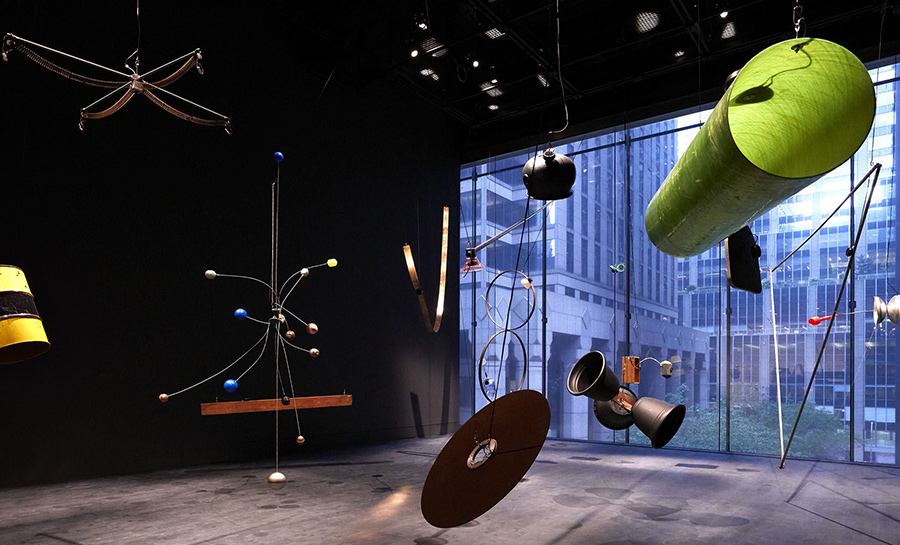 “Rainforest V (variation 1)” by David Tudor and Composers Inside Electronics Inc. is on display at the Marie-Josee and Henry Kravis Studio on the fourth floor of MoMA from Oct. 21, 2019 to Jan. 5, 2020 (Source = MoMA)

Sharing the value of design and innovation

Hyundai Card has maintained a special relationship with MoMA over the past 13 years as one of its leading partners.

“Sponsoring MoMA, an icon of innovation in the art industry that has broken the mold and cliche of the conventional art, has been very interesting,” said a Hyundai Card spokesperson, “given it has been customary for us to combine design and innovation with business management. We are aware MoMA also enjoyed working with us.”

In partnership with MoMA, Hyundai Card also hosted the exhibition “Humble Masterpieces – Everyday Marvels of Design” in Korea in 2008, four years after the show was held at the MoMA. The exhibition featured nearly 120 simple objects – from Post-It® notes to paper clips, Band-Aids to Bic pens. The objects are considered masterpieces carrying design values regardless of size and price.

In 2009, Hyundai Card worked on “Destination: Seoul,” an art project aimed at discovering and supporting the works of promising Korean designers. The designers were introduced to the MoMA Design Store, which helped them step up their international reputation.

Partnership evolves from sponsorship to collaboration

Hyundai Card has been an exclusive sponsor of many of MoMA’s landmark exhibitions, dedicated to modern and contemporary art and design.

The sponsorship started with “Bauhaus 1919-1933: Workshops for Modernity” in 2009 and continued with “Talk to Me: Design and the Communication between People and Objects” in 2011 and “Le Corbusier: An Atlas of Modern Landscapes” in 2013.

The collaboration with MoMA has been active not only in New York but also in Seoul. A case in point is “Hyundai Card Culture Project 09: Tim Burton” in 2012, which offered an opportunity for the Korean audience to visit a MoMA’s major exhibition in Seoul without having to visit New York.

Hyundai Card also worked with Paola Antonelli, MoMA’s Senior Curator of Architecture and Design, for the planning of Hyundai Card’s Design Library. The library opened in Gahoedong, northern Seoul in 2013 and four small-sized MoMA exhibitions took place at the venue.

Hyundai Card and MoMA also ran a joint internship program for talented young Korean artists and professionals. Through Curatorial Exchange Programs, which has been going on since 2011, MoMA curators as well as Korean artists and curators were able to meet and exchange ideas.

Between 2014 and 2017, Hyundai Card joined forces with the MoMA and the Korean National Museum of Modern and Contemporary Art (MMCA) to run “Young Architects Program” to pick talented young architects of Korea.

Going so far as to support performance art

In tandem with the MoMA’s reopening, Hyundai Card serves as an exclusive sponsor for two performance art exhibitions under the title “Hyundai Card Performance Series.”

One is “Haegue Yang: Handles,” a site-specific installation and performance by leading Korean artist Haegue Yang and the other is “member: Pope.L, 1978-2001,” which features work across mediums, including a series of landmark performances, by the groundbreaking artist Pope.L.

Through the “Hyundai Card Performance Series,” Hyundai Card opened a new chapter in its partnership with MoMA.

“It is meaningful that Haegue Yang’s exhibition is exclusively sponsored by Hyundai Card, which has long supported Korean artists wishing to expand their foothold globally,” said a Hyundai Card spokesperson.

You can spot Hyundai Card brand name in a lot of corners of the newly-opened museum. A phrase that goes, “Media and Performance at MoMA is made possible by Hyundai Card” is also to be found.

Hyundai Card and MoMA have shared philosophy and core values as partners.

“We have decided to sponsor MoMA exhibitions on belief that the museum’s philosophy of actively embracing ‘performance,’ new and alternative art form and bringing innovation resonates with the value that Hyundai Card pursues,” said Minjoung Cho, director of Hyundai Card Brand Department 2. “Hyundai Card will continue to support Korean artists trying to enter the global arena, based on long-held trust and partnership with MoMA.”