Impossible is nothing:
business lesson 101 in India 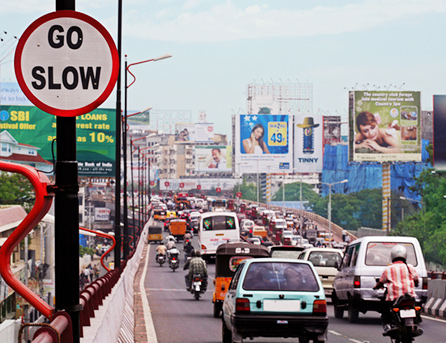 Vehicles fill the street during a rush hour.
(Source = gettyimageBank.com)

Let me start with my anecdote in India last year. It happened only a few months after I began working at Hyundai Capital India. There were quite a few meetings with local financial firms to get myself acquainted with the Indian business culture. Like other business meetings elsewhere in the world, the discussions with the Indian counterpart overflowed with points of contention. Fearing that the session would end without a fruitful outcome, we made a final proposal.

Surprisingly, our Indian counterpart accepted our offer. The only thing that bothered me was that the Indian colleagues said “No problem” while shaking his head. Only days later did I realize that it was their polite way of rejection.

Instead of expressing outright refusal, the Indians made their rejection as vague as possible to avoid hurting others’ feelings. The same went for “Sure thing.” No matter how convincing the words sounded, there was nothing set in stone before signing a contract.

“In India, nothing works. But everything can work.” I believe it is the most important lesson you should learn when you do business in India, a country where being hours late for a business meeting is excusable due to frequent traffic delays. Even American author Mark Twain quipped, “The thing that was to happen would happen in India” after spending endless hours waiting for a train. Let me tell you about how I survived a country where nothing is impossible.

Why Indians draw Swastika on their cars?

Do you know what Koreans did when buying their first car in the 1970s? While it may seem odd to the millennials, they used to offer a shamanistic ritual to ensure safety and happiness. The ceremony, dubbed “gosa” in Korean, used to go as follows: opening every door in the car, pouring makgeoli (Korean rice wine) on all of the tires, placing a swine head before a grill and kneeling to bow to the vehicle. Some drivers even placed a dried pollack beneath the driver’s seat as a wish-me-luck symbol.

Indians go a bit further than Koreans did in the past. In a ritual called “Puja,” Indian drivers offer blessings to their new car in a little more luxurious way. First, the car owner recruits Pujari, performer of the Puja ceremony. The Pujari sprinkles rice on the vehicle hood and draws swastika mark on it with its third finger of the right hand. Swastika is perceived by many as a Nazi symbol but it actually symbolizes auspiciousness in India. The ceremony ends with the car owner sprinkling coconut and lemon juice to the tires.

Car mean a lot to Indians. Given that the country’s per capita gross domestic product stands at nearly one-15th of Korea’s, purchasing a vehicle is a special occasion for individuals. Some Indians drive without unwrapping seat covers for years. Some drivers carry a temporary license plate for over a year to brag about driving a new car even after applying for a formal plate.

What happens to the world’s fourth-largest car market?

There was a time when experts painted a rosy outlook for the Indian car market. Buoyed by robust economic growth over the past few decades, a growing number of middle-class households began to purchase their own cars. In 2018, about 3.3 million new vehicles were sold in India – a record that propelled the country to the world’s fourth-largest auto market, outpacing Germany... Some even forecast it would be only a matter of time for India to overtake Japan and become the world’s third-largest auto market.

However, the Indian auto market went through an unprecedented downturn last year. Compared to a year earlier, 2018 car sales declined by about 12 percent to total 2.9 million. Industry heavyweights such as Maruti Suzuki, Tata and Mahindra took painful cost-cutting measures, such as reducing car production, shutting plants temporarily and letting go of contract workers.

The collapse in sales was attributable to India’s unique financing system called “shadow banking.” Instead of lending from big-name banks, most Indians conventionally rely on small financial firms for credit loans to purchase vehicles. Many of those shadow banks suffered from liquidity squeeze caused by a series of defaults last year, which made it hard for prospective car buyers to acquire capital. Vehicle dealers were forced to shut down amid faltering sales, which resulted in sluggish car sales across India.

Is there a way out?

Many say opportunity lies in every crisis. It many sound extremely lame but it may work for Hyundai Motor, which is poised to launch various marketing activities in the Indian market this year. Led by such popular small-sized SUVs as Kia’s Santos and Kia’s Creta, Hyundai Motor aims to attract more local consumers and we Hyundai Capital India will join the efforts with more advanced auto financing services.

Unlike other countries around the world, India does not support the idea of a certain carmaker forging an exclusive partnership a single financial firm. That makes it challenging for Hyundai Capital to offer monthly car payment services to Hyundai Motor vehicle buyers via its Indian operation. This is why Hyundai Capital India operates as an “advisory corporation,” which focuses more on enhancing local partnership than selling products directly. Including an online car-purchasing website site Click to Buy, various projects with local financial companies are underway to attract more Hyundai Motor vehicle buyers.

Many people have asked me what to do to do business well in India. My answer has always been the same: building network and trust will never betray you. It is true I was frustrated a lot of times by Indian partners who did not show up on time or broke their promise. But trying to stay calm and being more flexible will naturally show you the way. Don’t forget that there is nothing impossible in India.