Kim, an office worker, commutes on a taxi hailed through a smartphone app. He eats lunch using a self-ordering kiosk at a fast food chain and places an order for a takeaway coffee via an app on his way to the cafe. Returning home from work, he stops by a supermarket to shop for living necessities and pays at a self-checkout counter. He then picks up the clothes and cosmetics he ordered the day before on an online shopping mall from an unmanned delivery box installed at the convenience store in front of his residence. Arriving home, he finds freshly washed clothing delivered through an on-demand laundry app in just two days. Now he is about to order dinner with a delivery app.

Revenue from “untact” services has grown five-folds in two years

We are living in an era when we can spend a day without interacting with any other human being. Even if you do encounter people in everyday life such as taxi drivers and servers at fast food establishments and cafes, you don’t necessarily have to communicate with them. Those service providers are no different than machines or robots. “Trend Report 2018,” a Korean book that comes up with trend projections for a designated year, describes services without contacts with human or with minimized contacts as a newly coined term “untact.”

It turned out the keyword “untact” has clicked with mobile-adept millennials who tend to collect information through social media platforms such as YouTube, Facebook and Instagram and to prefer online interaction with other human being. That led a number of corporations to launch the so-called “untact marketing campaigns” targeting those in their 20s and 30s.

The analysis found that untact consumption has been increasing sharply each year. Combined revenue from the 15 outlets grew nearly five times from 6.7 billion won as of January 2017 to 35.9 billion won as of May 2019.

Millennials are the main driver of the untact consumption growth, the analysis also showed. Payments made by consumers in their 20s and 30s, or millennials, accounted for 28.4 percent and 50.7 percent each of total. Their combined share amounted to nearly 80 percent.

Untact services most welcomed by consumers in their 40s 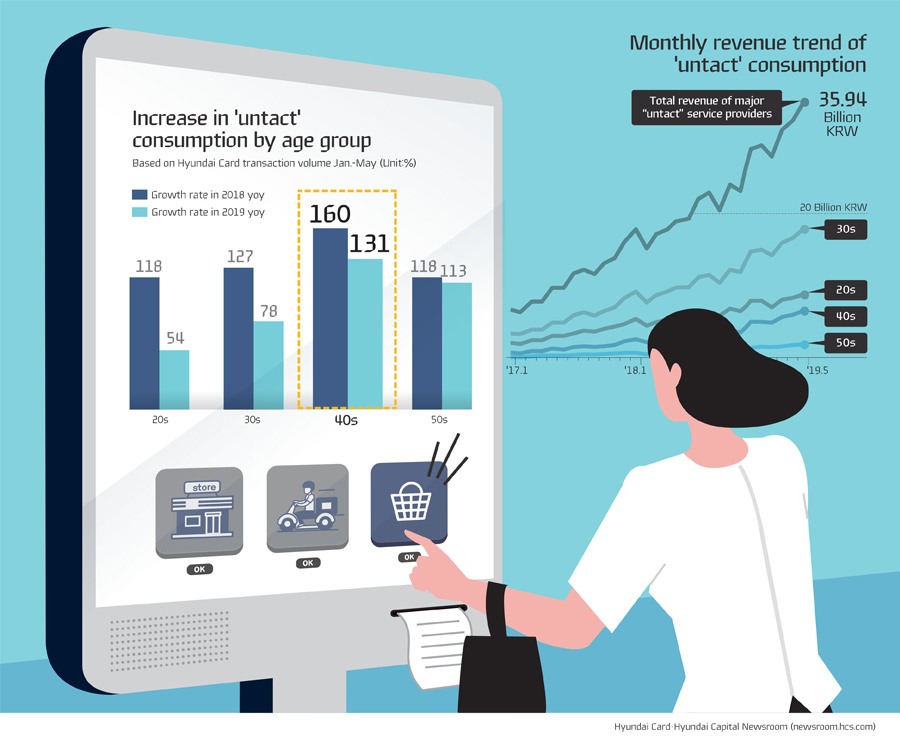 Notable in the fact that the demand for untact services among consumers in their 40s has been growing at the fastest pace. Total value of the payments they made for untact services in the first five months of 2018 jumped by nearly 160 percent year on year, followed by an on-year growth of 131 percent over the same period in 2019. When it comes to comparing between 2017 and 2019, the growth rate is close to 500 percent. That compares to 235 percent among twenty-somethings and 304 percent among those in their 30s over the same two-year time span. Whereas consumers in their 20s and 30s triggered untact service market and made it bigger, those in their 40s grew accustomed to the services at a rapid pace and contributed to spreading the consumption behavior to other age groups.

They survey also showed 37.1 percent of the respondents have been using services provided through in-person contacts less frequently after once experiencing untact services. Traditional contact-based services are being increasingly replaced with untact services, the data means.

Why are consumers moving toward untact services? It has been widely assumed that consumers choose unmanned services as they are increasingly tired of direct contact with other human being. But the survey result offered an unexpected perspective. Nearly 69 percent of the respondents cited convenience: reduced time for ordering, paying and receiving products or services, eased method of payment; and possibility of placing order regardless of time and place. Only 10.7 percent cited the burden for communication with servers and clerks.

Among various untact services, consumers used food delivery services and beverage and food outlets the most frequently. For the former, 76.1 percent of the respondents said they have used since 2019, compared to 73 percent for the latter.

When it comes to how satisfied the users were with respective types of untact services, 71.8 percent – the largest portion – mentioned financial services.

Hyundai Capital’s data on how frequent its mobile-app based auto financing product subscription system is used support the result. The service system was used 4,706 times as of July 2017, the point of its launch, and increased nearly 5.5 times to 30,737 as of May 2019. Of all the auto financing service subscriptions made at Hyundai Capital, the share of those filed over the mobile system has been rising constantly – from 28.1 percent in 2017 to 64.9 percent in 2018 and to as much as 74.8 percent. Customers may subscribe to auto financing products around the clock on their smartphone without having to talk to counselors over the phone or visit local branches and submit physical documents.

Application for auto financing product subscription on smartphone app outpacing that of offline counselors in just seven months of the mobile system is noteworthy because it indicates consumers of financial services, usually considered conservative, are rapidly migrating to untact services.

But it can be risky to conclude that financial service users tend to refrain from in-person contacts more than any others. When respondents who said they used untact financial services before but no longer did since 2019 were asked why, 74.7 percent said mobile apps do not allow discussion in detail about products and services. When the same question was asked to those using transportation, food delivery and shopping services, respondents cited difficulty of using devices such as mobile apps and self-service kiosks, and lack of diversity in the types of brands and stores.

In a nutshell, users of financial services prefer to minimize contacts with counselors while they also wish to obtain detailed information that humans can better provide than machines.

That prompted Hyundai Card to introduce Buddy, a Watson-based chatbot, in 2017 to become the first Korean financial service provider to do so. In February 2019, Hyundai Card launched a card issuance app that entirely removed human engagement – from application filing to screening. In April 2019, Hyundai Card came up with AI-ARS (Artificial Intelligence-Automated Response System), which deploys an AI counselor that immediately deals with customer service at request.