Queen is coming to Korea, finally. 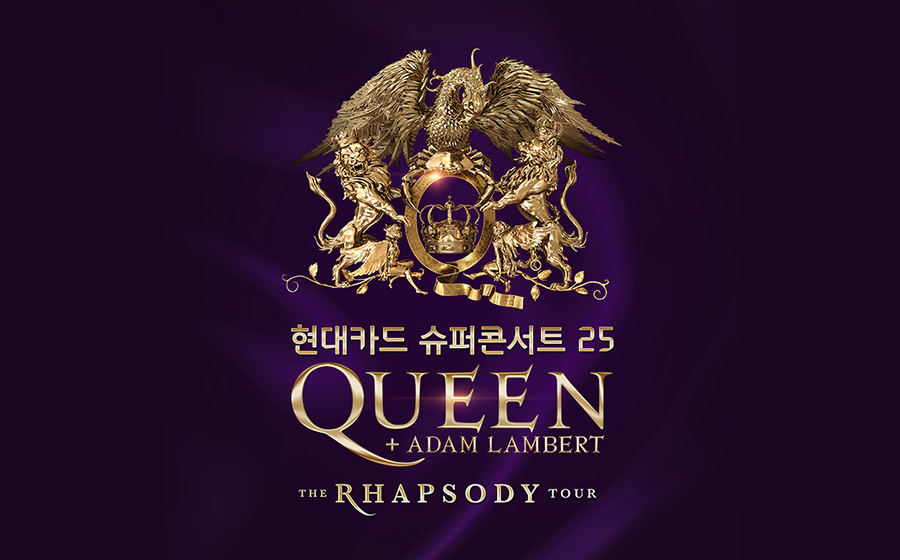 Queen is coming to Korea, finally.

The legendary British band that rocked the world in the 1970s and 1980s will be hitting the Korean stage through Hyundai Card’s 〈Super Concert 25 QUEEN〉, scheduled on Jan. 18-19 at the Gocheok Sky Dome, western Seoul. The concert is part of “The Rhapsody Tour,” a world tour that kicked off in Vancouver, Canada in July 2019.

Ever since “Bohemian Rhapsody,” a biographical film about Queen’s lead singer Freddie Mercury, was released in October 2018, Koreans were immensely fascinated with his life as well as music. The film attracted nearly 10 million audience, leading to the cultural phenomenon dubbed “Queen syndrome.”

Queen’s hit songs were featured in a number of films, dramas and TV commercials here and parody videos of people impersonating Freddie Mercury in his signature mustache, white sleeveless T-shirt and jeans dominated the Korean pop culture for a while.

The members to join the world tour are: guitarist Brian May; drummer Roger Taylor; and Adam Lambert, a former “American Idol” star, to fill in for the Queen’s late frontman. Expectations are high that the first-ever gig in Korea, less than 10 days away, will reignite the Queen syndrome. 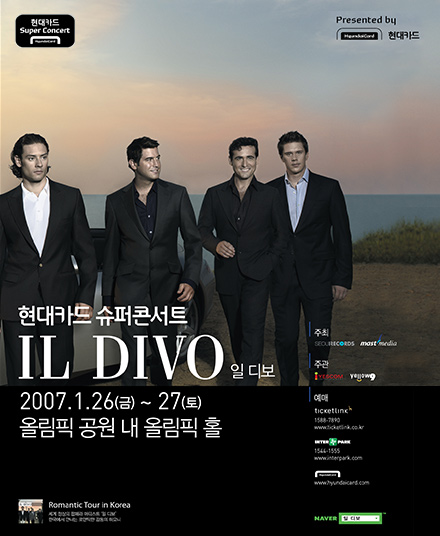 The poster of the first Hyundai Card Super Concert in 2007, featuring Il Divo

Only a limited number of musicians that are best described with adjectives such as “best” or “legendary” have been invited to take the Super Concert stages. Seeing them perform in Korea would have been mostly impossible if it were not for Super Concert.

Out of the total 25 musicians or groups that performed or will perform as part of Super Concert series – including Queen – 13 are having their first gig in Korea. They include: Il Divo, Beyonce, Craig David, Billy Joel, Green Day, Usher, Eminem, Chicago Symphony Orchestra, Paul McCartney, Coldplay and Kendrick Lamar. The 13 musicians or teams do not include the tens of global and indie artists that were featured in the two rounds of Super Concert Citybreak series, which took place in the summer of 2013 and 2014.

Among those 25 Super Concert artists, Billy Jeol, Stevie Wonder, Sting and Paul McCartney are legends who have been leading the Western pop music scene. In terms of the accumulated number of their albums sold so far, Paul McCartney’s has exceeded 200 million, whereas Billy Joel’s and Sting’s hovers above 100 million each.

Paul McCartney had his historic first Korea concert in May 2015 with Super Concert, more than half a century after Beatles came up with its first album in 1962. With that performance, he stood to the promise he had made a year earlier to definitely have a concert in Seoul as he was forced to cancel at the last minute, citing abrupt illness. The then 72-year-old fascinated the Korean fans with enormous enthusiasm and humor on stage.

Stevie Wonder, noted for distinctive voice and ability to play various musical instruments – from piano to organ, harmonica and drum – made it to the 11th Super Concert in August 2010. Given his age and recently reduced frequency of his live performance, it is highly likely that the concert a decade ago here will end up his last in Seoul.

It is also notable that the top pop music divas – Beyonce, Whitney Houston and Lady Gaga – took the Korean stage for the first time through Super Concert series. Whitney Houston, in particular, finally met with the Korean fans at the Super Concert in early 2010 as part of a world tour after a 10-year hiatus from her career for rehabilitation. But her first concert here became her last as she passed away two years later.

Coldplay produced more records than any other artists. The 22nd Super Concert the British rock band had for two days in April 2017 attracted 100,000 audience at the Jamsil Stadium, the largest number in the history of Super Concert. The band was initially scheduled to hold a concert for one day. But 45,000 tickets sold out in just one minute over the internet. Hyundai Card added another concert on the subsequent date, allocating the same number of seats. The new batch again sold out so fast that the company added yet another 10,000 seats with restricted views.

Coldplay left the audience emotionally overwhelmed as the gigantic screens on the stage featured “yellow ribbons,” the symbol of the 2014 Sewol incident – a ferry disaster off the coast of Korea that killed 304 people – and band members paid a silent tribute for 10 minutes.

The 24th Super Concert by Kendrick Lamar thrilled Korea’s hip-hop fans in the summer of 2018. Despite not being a household name among the general public, the rapper is the first hi-hop artist to win the Pulitzer Prize for lyrics on social injustice and racism.

During the 70 minutes or so gig, he performed 20 songs and the concert reached its climax when he played “King Kunta” and “Alright.” The entire 20,000 standing audience unleashed their voice en masse to the lyrics. 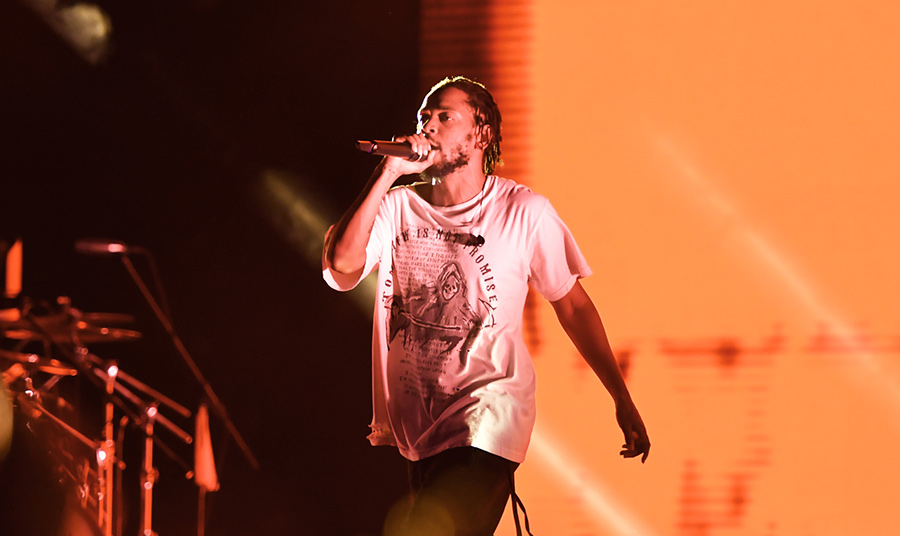 Kendrick Lamar, one of the greatest rappers, performs at the 24th Super Concert.

“There is something special about Hyundai Card Super Concert”

Super Concert preparation is not a short-term business. It takes eight months to as long as more than two years. The artist Hyundai Card is inviting is kept secret even within Hyundai Card until the last minute. Once the artist to perform at the subsequent concert is confirmed, the Music Team starts preparation to publicize the event in close cooperation with the artist’s agency. Public relations activities on various media outlets and social networks are a must. Unconventional online and offline events also take up a crucial pillar in the preparation to make the audience feel that concerts with Hyundai Card label are “special.” 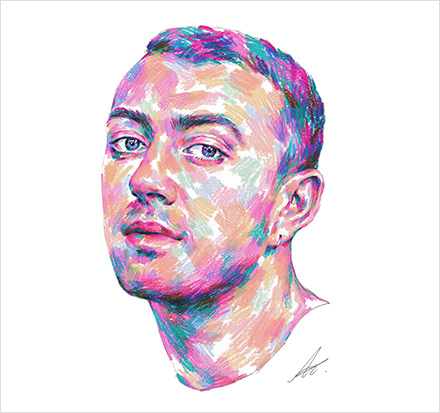 For about a month from Sept. 19, 2018, Hyundai Card hosted a cover song contest entitled “We Will Cover You” ahead of the upcoming Queen Super Concert. Contestants were supposed to pick one of Queen’s numbers to arrange according to their own style and 334 teams, including already established singers and popular YouTubers. took part.

Fifty teams, the largest portion, covered “Love of My Life,” followed by 41 teams who covered “Bohemian Rhapsody” and 16, “Don’t Stop Me Now.” The three apparently proved to be Koreans’ most beloved songs.

To mark Sam Smith’s Super Concert in October 2018, Hyundai Card two different contests. One is drawing the singer’s portrait and the other is making him a Korean name. A total of 1,098 people joined the drawing contest and a special booth was installed at the concert venue on the day of the event so that the audience could take a look at the paintings submitted and vote for the best piece.

It is unusual for Hyundai Card, a credit card issuer, to host a series of big-size concerts for nearly 15 years. Companies in most cases pay fees for cultural events as sponsors and do not get directly involved. For this reason, the majority of observers in the concert industry were pessimistic about the prospect of Super Concert series lasting for an extended period of time.

But Hyundai Card could have maintained the Super Concert series for such a long time span as it persistently pursued a goal: securing brand recognition through cultural marketing activities.

“’Instead of adopting a direct marketing scheme, such as ‘We will give you a lot of benefits, so please spend more with our card in return,’ we have opted for a slow yet more secure strategy: creating positive image and improving customer loyalty,” said a spokesperson at Hyundai Card. “It is based on the idea that young customers love to enjoy various cultural events.”

There are credit cards that specialize in shopping, paying for gas and financial services. But there was none that succeeded with services related to cultural events. Even though the demand for cultural events has been on the rise, customers barely feel the direct impact of such events, unlike with shopping.

Super Concert series has firmly established itself as a channel that allowed music fans in Korea to meet global superstars that are barely to be seen here. Who will be the next to come to perform has become the center of attention and whenever the online ticket office opened, fierce competition in the cyberspace took place among potential audience to reserve seats faster.

The Super Concert artist portfolio has produced another upbeat outcome: Korea being increasingly perceived as a concert venue to be visited among top foreign musicians. Performance by globally-renowned musicians creates a virtuous circle of bringing in other superstars.

“Top-tier musicians abroad have come to consider Korea/Seoul as a location where they are supposed to perform,” said a manager at the Hyundai Card Music Team. “We get queries from foreign artists considering to visit Korea if we are interested in hosting their concert. Before, we were the ones who had to make proposals.”

Who will be the 26th guest of the Super Concert? It still remains behind the veil but expectations are growing already. 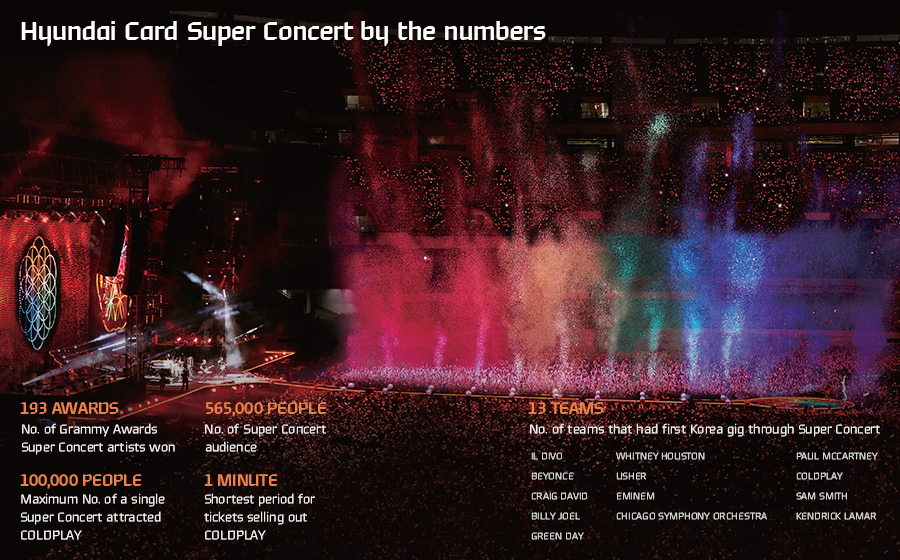 Impossible is nothing: business lesson 101 in India