It is widely acknowledged that the launch of 52-hour workweek in 2018 in Korea contributed to shortening the time corporate workers spend at work. But that doesn’t mean they have gained ample extra hours during weekdays. Double-income households with children are stricken with chronic shortage of time. They have to spare extra hours to take their children to the kindergarten and bring them back before and after work; prepare meals and clean them before going to bed. On weekends, married couples with children have heaps of household chores to take care of – from laundry to dish washing. It is needless to say parents should play with their children – another burden they can’t avoid.

There is a way out of all of the burdens: choosing to outsource laundry, wash dishes and hang around with your children. Are Koreans increasingly opting for the services even if that means more household budget?

It turned out Korean households have been increasingly spending on making their life more comfortable and easier. The data came from 20 companies in four household chore types: childcare, housecleaning, food delivery and laundry. Users may search those services – either on the web or mobile apps – place order and pay.

According to the analysis, the number of household chore-related services used in the first 10 months of 2019 soared nearly 3.4 times from the same period in 2017 – from 56,690 to 190,042. The amount of payments also increased more than three times from 1.98 billion won to 6.21 billion won over the same time span. 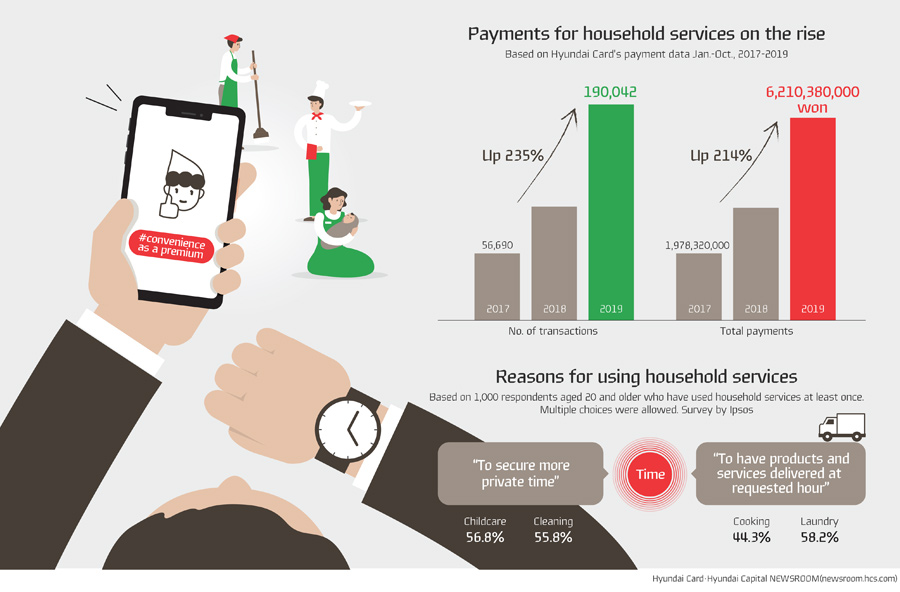 According to data from the Statistics Korea, Korea’s housework industry was valued at 7.5 trillion won as of 2017, the latest data available. Industry insiders currently estimate the value at 12 trillion won. The economic value of household choirs that each family member took part in without outsourcing stood at 360.73 trillion won in 2014. If more households decide to go ahead with using external workforce for housework, the scale of those web- and app-based household task services is expected to grow even further.

Hyundai Card∙Hyundai Capital Newsroom looked into the characteristics of the household chore service users to find out what lies behind the emerging trend.

By generation, users in their 30s accounted for the largest portion by the amount of money paid. In 2019, they captured 50.04 percent of the entire payments made for housework services. Those in their 40s followed suit at 38 percent, twenty-somethings at 9.89 percent and those in their 50s at 9.78 percent. Customers in their 60s made up 2.29 percent. 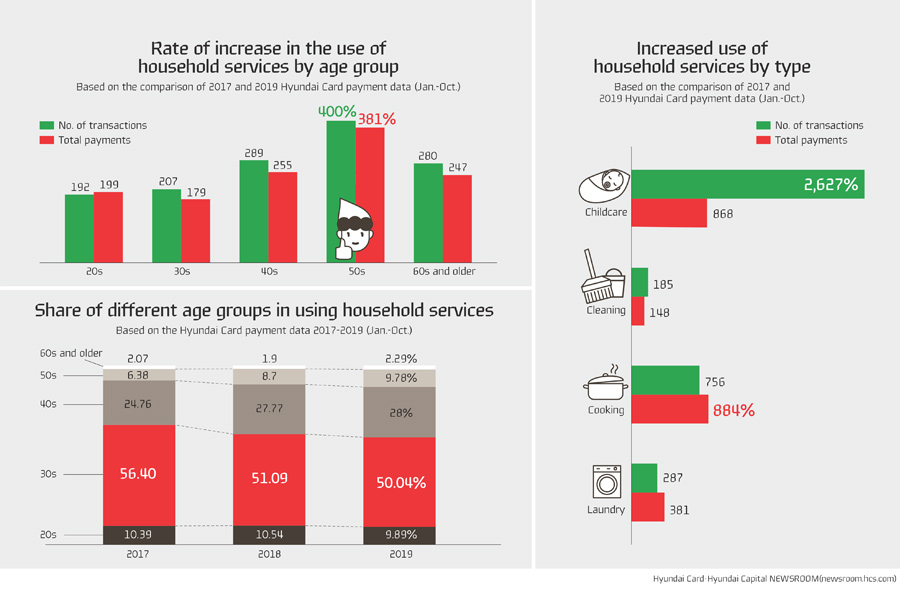 “Given the frequency of outsourcing housework services and payments made for them have been rapidly rising over the past three years, a lot of Koreans seem to be paying attention to such services and are willing to more actively use them,” said a spokesperson at Hyundai Card. “Even though outsourced housework market is small, the number of users is projected to grow much more, seen from the pace of growth regardless of generation and gender.”

Pursuit of convenience and premium lies behind the popularity

What is the reason people are increasingly opting for paid household chores? A recent Korean publication entitled “Trend Korea 2020” has coined a portmanteau, “pyeolimium” to explain the trend. Pyeolimium combines “pyeoli,” meaning “convenience,” and “premium.” Koreans now tend to equalize convenience with premium, the book says.

Time has become more valuable due to the trend of Koreans prioritizing experience over possession. In this aspect, services that help people spare time, eventually leading to convenient premium life style, will grow much more important over time. Busy double-income couples or families with children who suffer chronic time shortage, in particular, are more than willing to use products and services that enhance their quality of life. That naturally props up the demand for housework outsourcing.

A survey by the Hyundai Card∙Hyundai Capital Newsroom, jointly with a research firm Ipsos of 1,000 consumers aged 20 and over, came up with a similar analysis. The majority of respondents cited “time” as a major reason for using services for household tasks. They can spend the time and ensuing efforts saved from the services on something they consider more valuable.

As upshots of using childcare services, for instance, they mentioned “being able to secure more private time” and “various products customized according to different time slots and cost brackets” in order of importance.

Changes in how household chores are socially recognized have also contributed to the increased use of housework outsourcing services, the survey showed. Almost 73 percent of the respondents answered “yes” to the question of whether “childcare and household chores are labor.” Of them, 17 percent said they did not consider housework a type of labor three years earlier but they do now.

Asked why they think of household chores as part of labor, 69.2 percent of the respondents cited “requiring physical energy” and 58 percent, “demanding time.” Forty-eight percent mentioned “mental stress.” When surveyed on their perception of paying for household tasks, 64.2 percent were positive about the idea, whereas only 2 percent came up with a negative view.

As to whether household chores should be equally taken care of by both genders, 82.9 percent said they think both men and women are supposed to take part. Some 15 percent said they “agree to a certain degree” to the idea whereas only 2.2 percent expressed disagreement.

The result is slightly more positive than that of a similar study conducted by the Statistics Korea in December 2018. Only 60 percent of the respondents in the annual survey said married couples should share household chores.

“The perception of household chores has a huge impact on the use of housework, we learned through the survey,” said the spokesperson at the Hyundai Card-Hyundai Capital, “and the pace of the perception change is rapid.”