Parasite is born to be honest, says Bong

“We never write to represent our countries, but this is very first Oscar to South Korea,” said director Bong Joon-ho at the 92nd Academy Awards in Los Angeles on February 9 as he was awarded Best Original Screenplay for his film “Parasite.” That was not the end. He went on to win three additional Oscars: Best Picture, Best Director and Best International Feature Film. Parasite has become the first foreign-language film to win the Best Picture, a milestone not only for the Korean film history but also the 92-year history of the Oscar.

Q. Can you recommend a movie that you have recently enjoyed for our DIVE readers?

A. I want to recommend “Knives Out.” It features Chris Evans, who worked with me for “Snowpiercer” and other great actors and actresses. It is a murder mystery whodunit film. Many people from my generation are a huge fan of Agatha Christie mysteries and “Knives Out” also has an excellent storyline and is full of interesting mysteries. I believe young audience would love it too.

Q. Is there anything that you’re into nowadays?

A. Yes. I have a puppy named “Jjuni.” He is my soul mate. He is presumably Norwich Terrier or mixed-breed. Norwich is a city in England and Norwich Terriers are popular in the region. Jjuni has been healing my soul.

Q. Metaphors in Parasite, such as staircases, semi-basement, smell and others were quite intuitive, stylish and real. In some of your previous works, I felt metaphors were abstract, but the ones you used in Parasite came as very natural. When you look back on directing Parasite, do you feel your attitude towards dealing with metaphors has changed?

A. When I write a movie script or shoot a film, I don’t necessarily manage symbols intentionally. I always write out of impulse film and shoot what my mind tells me to. I feel flattered anyway because your question means my film is more concrete, not abstract. I want to take an example with a scholar stone, or “landscape stone” featured in Parasite. Ki-woo, played by actor Choi Woo-shik, says, “It’s so metaphorical” upon seeing it early in the film. Usually audience or a critic say so. Although I said I am not conscious of metaphors, I actually hoped that people won’t consider it too much of a metaphor. The landscape stone was just a stone that could smash Ki-woo’s head, not an abstract symbol.

Q. In one of your media interviews, you said that you wanted to be honest when working on Parasite. Some audience say they felt uncomfortable watching the film because of that element. How do you strike a balance between the virtue of honesty and discomfort coming from it?

A. I don’t think balance is very relevant. I thought I had to be honest with Parasite. There are some things that you know about but don’t usually talk about – honesty, pungency and explicitness. You feel about rich and pour every day, looking at the people you encounter on the road or those sitting next you in the bus or subway. But you don’t talk about it. This film is explicit about it, however. It was meant to be from birth.
Staff in the PR or marketing were concerned about it a lot. But I don’t think I had any choice as a director. This film itself was born to talk about the issue. 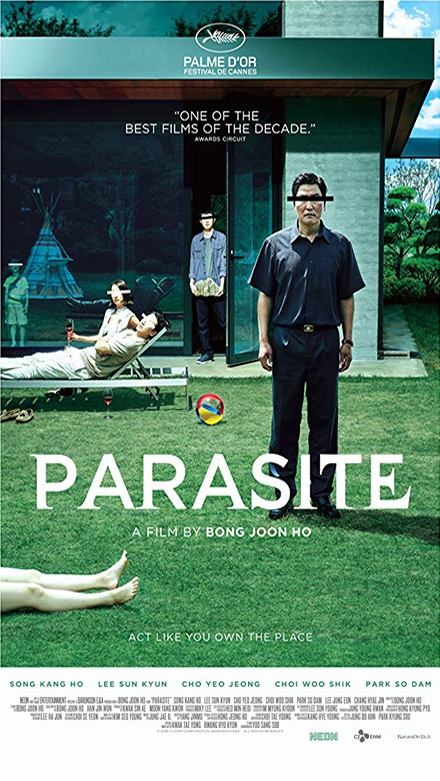 Q. Parasite has been doing well at the U.S. box office. Do you think the film touched on something that Americans can also relate to?

A. It has been well-received not only in the United States but also in many countries such as France and Vietnam across Europe and Asia. People say that the story about the gap between the rich and the poor worked viewers but I’m not sure. I don’t think that’s important because there are tons of soap operas or films dealing with that topic. Reactions from all different countries were same. They talked about the unexpected direction the story headed toward. Many said they liked how unpredictable it was until near the end or how much surprised they were. I think that point mainly appealed to the audience.

Q. Are you aware that the “Jessica Jingle” in the movie is in fashion? The melody, based on “Dokdo (Island Dokdo) is our Land” has become quite global. How do you feel about it?

A. It’s a sort of a chant. Writing the script, I thought the melody suited for a chant. The tempo was proper for any lyrics to come with. “Jessica, only child, Illinois, Chicago…” The three-three-four-three syllables in Korean sounded okay. It won’t be bad if any internet user tries to dig deeper to find out the origin of the song.

Who is Bong Joon-ho?

After his debut film “Barking Dogs Never Bite” in 2000, Director Bong Joon-ho achieved commercial success in 2003 with his second feature film “Memories of Murder” attracting five million audience. “The Host,” a monster blockbuster grossed 13 million, setting a new box office record in 2006. His subsequent feature films such as “Mother,” “Snowpiercer,” and “Okja” all made box-office hits and his latest film “Parasite” won the Palme d’Or at the 2019 Cannes Film Festival and sold 10 million tickets in Korea, the pinnacle of his cinematic career.

How I became a Hyundai Card employee