We are intuitively reminded of a brand at the mere sight of branding phrases or product names written in a corporate font. That is why font branding is considered as the fastest, most powerful and direct communication method.

On August 17, Hyundai Card, Korea’s top credit card company that also leads in the fields of branding and design, unveiled an updated version of its own trademark corporate font, YouandiNew.

In 2003 Hyundai Card became the first Korean company to develop its own corporate font, named Youandi. Since then, Hyundai Card, as well as its sister companies Hyundai Capital and Hyundai Commercial, have been using the font for product branding and all official documents issued by the company. Now, after a 14 month-long process of re-design and renovation, Hyundai Card has come up with the YouandiNew font. 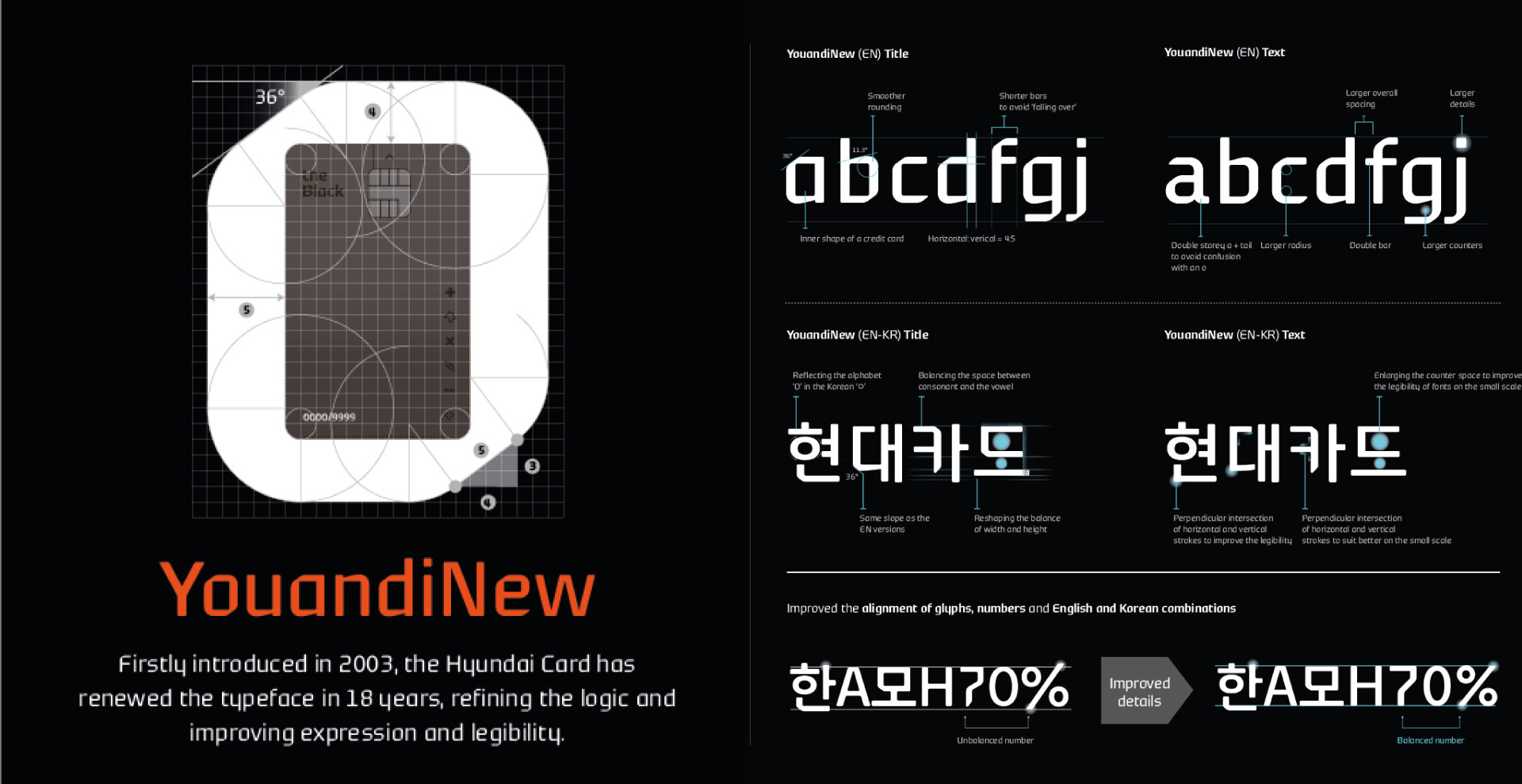 The Youandi typeface was originally inspired by the shape of a credit card. As the saying goes, “Good type means more than words,” the design of the typeface reflects serves as a driving force behind a strong brand identity.

The renewal focused on optimizing the font for use under digital environments such as apps and web pages; improved readability; a better balance between English and Korean characters; and symbols and an expanded number of styles. The font has set another milestone of becoming Korea’s first Digital Variable Font for corporate use.

"The original designer Aad van Dommelen, who first developed the Youandi English font in 2003, took charge of this project. Lee Ho, former head of the Type Design Center at Yoondesign, who developed the first Youandi Korean font, also led this renewal," said Richard Ahn, Director of Hyundai Card Design Lab. "The key elements of the typeface that have been diluted over the last 18 years were revisited and reinforced by the original creators. It is meaningful that we have vastly improved the capacity of design expression by expanding to a full range of styles and weights and boosted usability and readability with typefaces optimized for various mediums that have evolved over time.”

YouandiNew comes in both English and Korean. The existing 5 English-language font styles expanded to 23 through the addition of italic, condensed, and expanded variations. Korean typefaces styles increased from 5 to 12. As a result, the number of basic English font types grew 15 times, compared to two times for Korean.

The logic of the typeface has also been refined. By re-establishing the rules of the typeface, Hyundai Card has redeveloped it in a more precise form, and ameliorated any imbalance between shape, height, and size when combining Korean and English letters, numbers, and symbols.

The new typeface allows users to arbitrarily adjust the thickness, inclination, and width of characters within a single font file – the first of its kind among all Korean corporate fonts. That way, the font can be used in an infinite number of styles as the shapes can change flexibly while maintaining a data size 10% smaller than that of existing static fonts, which in turn shortens loading time significantly. 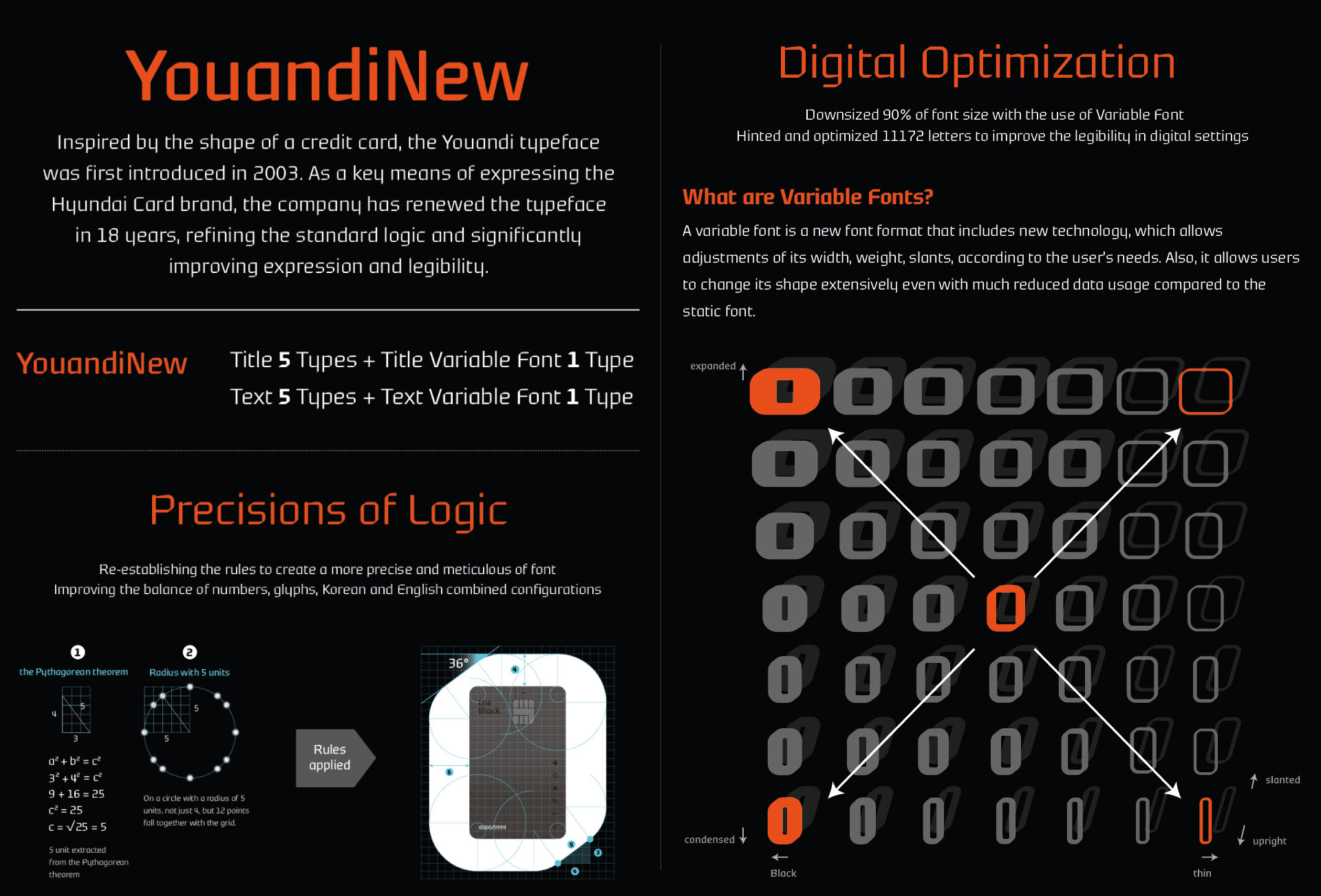 Many companies have recently started paying attention to the importance of typefaces, and now almost all companies are making major changes to their design systems to create their own typefaces. Hyundai Card played a major role in inspiring Korean companies to pay attention to exclusive typefaces.

As a top Korean credit card issuer and powerhouse in branding and design, Hyundai Card developed Youandi, a typeface exclusively for its own use, even before developing other design elements. Communicating through fonts was a unique idea that had never been attempted by a Korean company.

In 2003, Hyundai Card developed 16 styles of Youandi English-language fonts with creative director Aad van Dommelen, creative director of Total Identity, a Dutch company, and Total Impact, a Korean company. In 2004, two additional Youandi Korean fonts were developed in collaboration with Sandoll. In 2013, Hyundai Card collaborated with RixFont to renew the English and Korean fonts, developing three additional fonts for titles and two fonts for body text, naming them “YouandiModern.” The most recent renewal is the result of a collaboration between Hyundai Card Design Lab and Aad van Dommelen.

The name of the typeface was also inspired by the fact that Youandi sounds similar to Hyundai when pronounced. The physical shape and proportions of a credit card have been reflected in every character. When the rounding of the corners of the card plate was altered minutely, this was reflected in detail in the typeface and corporate identity.

The most significant aspect that discerns Hyundai Card's font from others is its reflection of corporate identity in the font. Unlike other companies that have mostly concentrated on logos when it comes to corporate identity, Hyundai Card has created corporate image through its font. Without a logo, Hyundai Card’s identity has been intuitively and efficiently imprinted on the minds of the public. 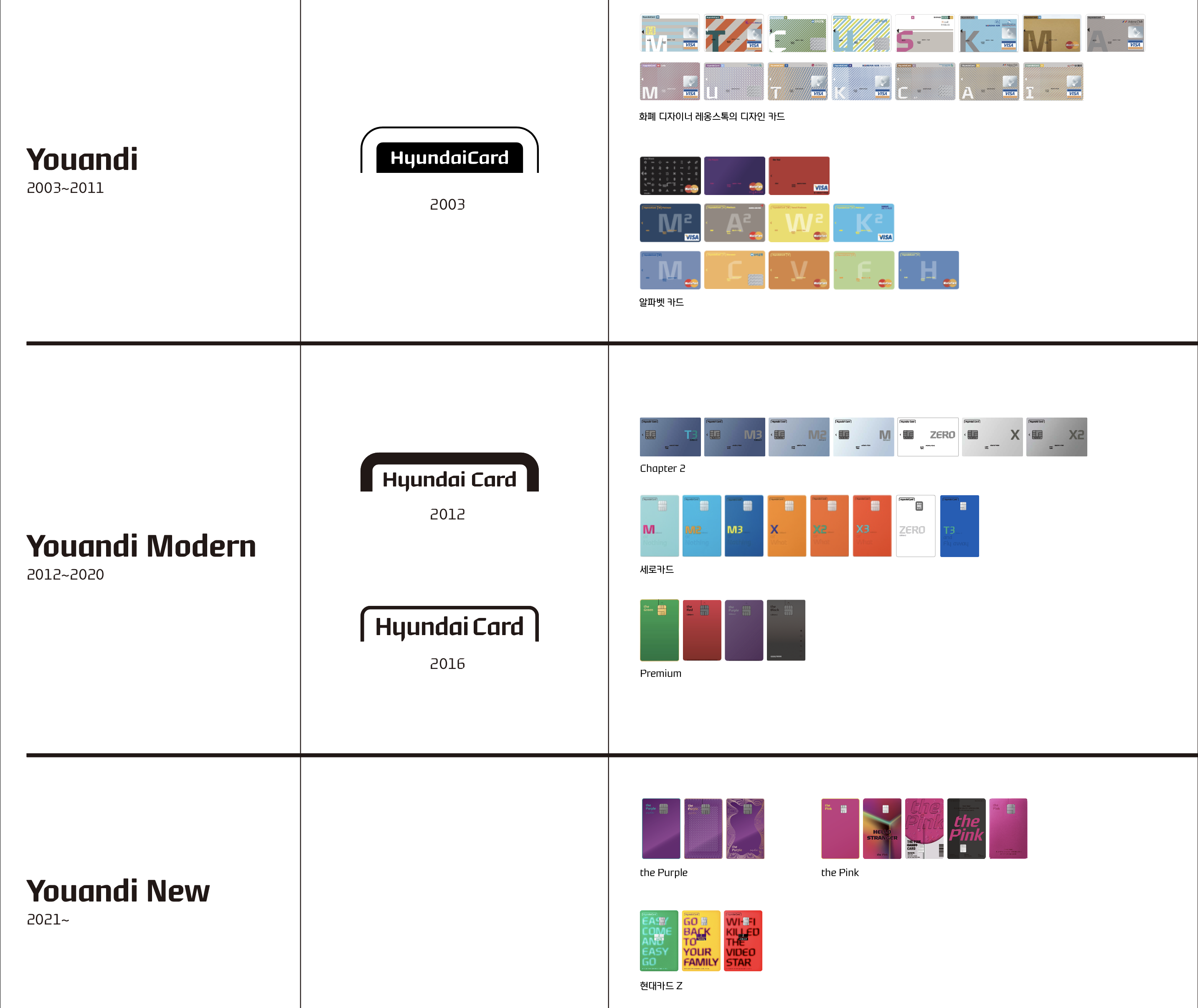 Where there is a trademark corporate typeface, the brand identity of that company is bound to be baked into it. This is why typefaces are sometimes called the ultimate branding.

"Corporate fonts provide a consumer’s first impression," said Sarah Hyndman, the author of "Why Fonts Matter," in an interview with the New York Times in August 2020. Corporate typefaces are a means to easily maintain and effectively utilize brand consistency in various fields, from simple corporate formatting to design, development, and marketing. Even if development takes a lot of time and cost, it can be beneficial in the long run, such as unnecessary license cost reduction.

Apple's San Francisco typeface, designed in 2015, is widely used on keyboards and in iOS devices. Dunkin' Donuts removed the steaming coffee cup graphic from its logo in a 2018 rebranding and changed it to a corporate image of only the word “DUNKIN” with a donut font that gives a round, chewy, and soft feel. Global financial giant Goldman Sachs also produced its own typeface, Goldman Sans, in 2020 and made it freely available for anyone to use. 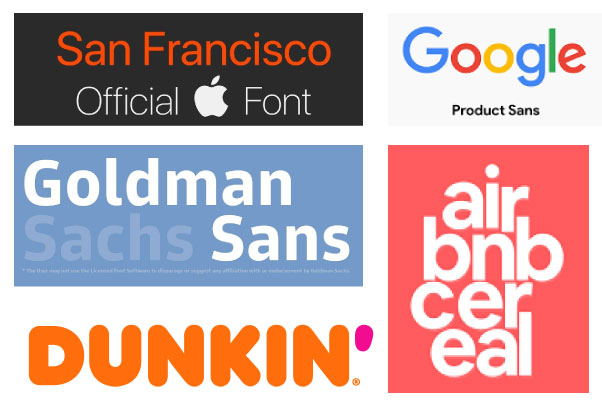