Located between Seoul and Daejeon, the city is home to various delicacies, independence activists and Korea’s most popular volleyball team Hyundai Capital Skywalkers

I took the afternoon off on January 21. It is my first day off this year. Just wanted to take some break from work. So I decided to get out of sprawling city and go to less crowded place. Driving seems burdensome. Since I have to go to work the next day, I didn’t really look at places far from Seoul. I turn on a Google map to search for a place that can be reached within an hour by public transit. Somewhere between Seoul and Daejeon, there was a city. Cheonan. 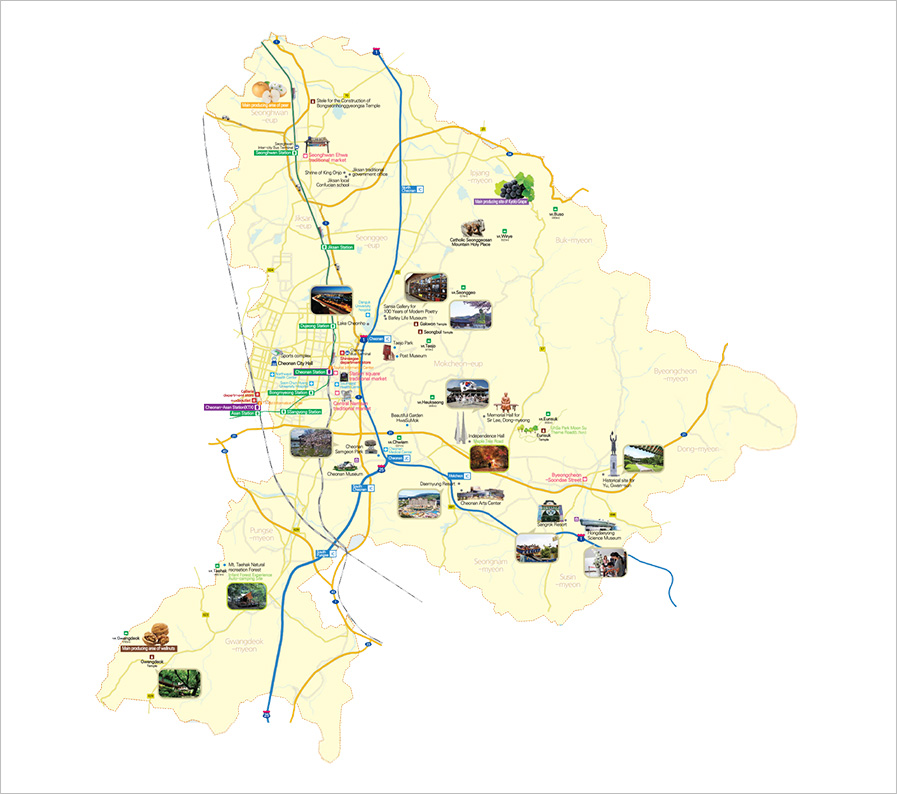 It took 30 minutes from Seoul Station to Cheonan Asan Station by KTX. After I got onboard, went to a restroom and browsed Cheonan on internet and I already arrived in Cheonan. It was ‘Daehan’ which is supposed to be the coldest day of the year, but it was warm like spring in Cheonan. It was well past the lunch time and I was hungry arriving at Cheonan Asan Station. I took a taxi to go to ‘Awoonea Market’, 20 minutes from the station.

‘Awoonae’ is an indigenous Korean word which means ‘Byeongcheon(箳川)’ in Chinese characters. So Awoonea Market is Byeongcheon Market. This is where the famous ‘Byeongcheon sundae’ was first made. Ham factories were built in the region in 1960s and the local people mixed vegetables with pork offal which was leftovers after making ham and put them in pork intestine to make Byeongcheon sundae. Sundae soup - fresh sundae put into hot pork stock was a fulfilling meal served to laborers and merchants nearby.

It was almost impossible to find a restaurant which has not been featured on TV or selected as best ones by the local authorities. So I picked a restaurant which seemed to have the smallest items on the menu and ordered two dishes, 11,000 won sundae and 7,000 won sundae soup. The portion was too big for one person, but I finished all the food anyway. It reminded me of Mr. Goro in a Japanese TV show ‘Solitary Gourmet’. 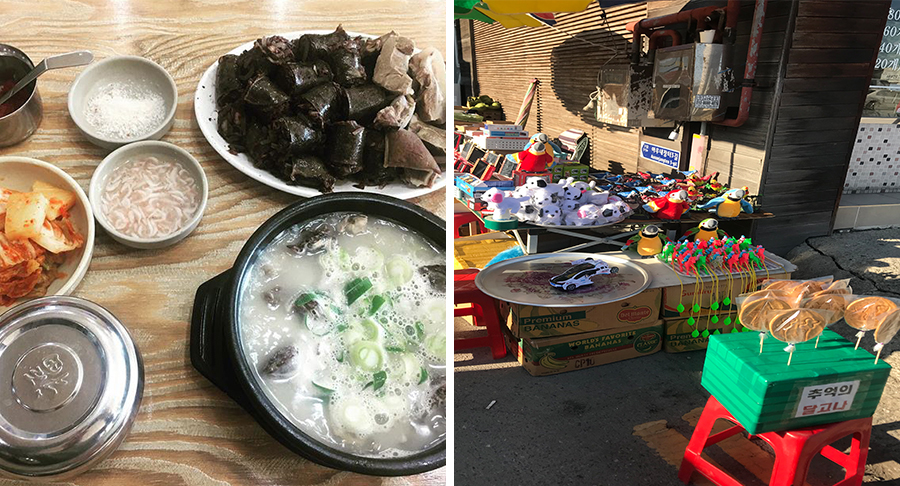 I decided to take the walking trails near the market to help with digestion. There were different trail courses which led to the memorials built to commemorate historic figures who were from Cheonan. The name introduced on the top was Yu Gwansun who was an organizer of the March 1st Movement against the Japanese colonial rule of Korea in 1919.

I had to follow a little stream right in front of the market to visit her memorial. A statue of her holding a national flag and shouting ‘Manse(Long live Korean independence!)’ with her hands in the air welcomed visitors.

I paid tribute to her and headed to the memorial. When I entered, there were a bronze mural depicting the March 1st Movement and a picture of Yu. She looked the exactly same as what I used to see in textbooks. Also, a ‘wall coffin’ that the Japanese used to torture Korean independence activists like Yu was on display in the hall. It is too tight, so you can’t really move inside. It is literally a coffin standing on the wall.

On my way to the Gymnasium, I saw numerous Skywalkers flags. I could tell how popular volleyball is in Cheonan. The taxi driver said, “Busan is known for Lotte baseball team and Cheonan for Hyundai volleyball team.” Cheonan became Hyundai Capital Skywalkers’ home when 2005 Professional Volleyball V-League launched. Skywalkers won 18 games in a row for the first time in the history of the Korean professional volleyball league during 2015-2016 season.

The game starts at 7 p.m, but the stadium was already packed with people visiting the place an hour earlier. At Skywalkers Goods Shop located in front of the Gymnasium, people were busy buying t-shirts, caps, badges, etc. Hyundai Capital players’ caricature products were particularly popular. Mini figures and mugs grabbed my attention. Korean walnut cookies shaped like Hyundai Capital Skywalkers mascot Molly and volleyballs were also sold at the shop. 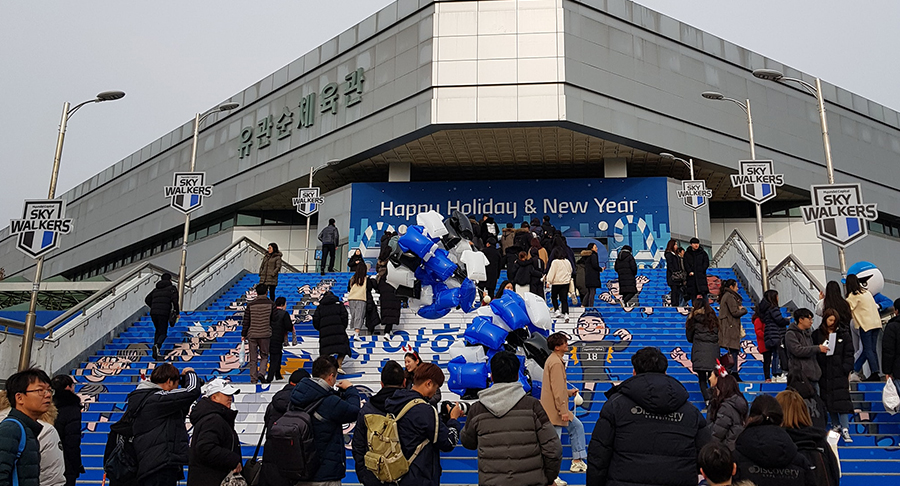 Before the start of the game, some fans visited the locker room, met with players and got their autographs. Hyundai Capital opens its locker room to fans who have applied for the opportunity in advance. Players were willing to take pictures with their fans and autograph on t-shirts. When asked whether they were interrupted by the fans before the game, Ugandan player Daudi Okello smiled and said that those fans are the ones who cheer him up.

The audience started to get ready to watch the game via diverse services enabled by smart entertainment technologies. While a new year’s greeting message from Skywalkers players playing on the main screen in the arena, fans enjoyed computer graphic featuring them on screens just like TV shows.

Convenience facilities Hyundai Capital introduced for fans were also eye-catching. It reduced the number of seats in the audience from 5,000 to 3,900 to help them enjoy games in a more comfortable setting. It removed the VIP zone and created the Family zone instead. I saw some fans in the special zone on the second floor which had the best views leaning against sofa and cushions, eating fried chicken and ‘gimbap’ and having a great time. 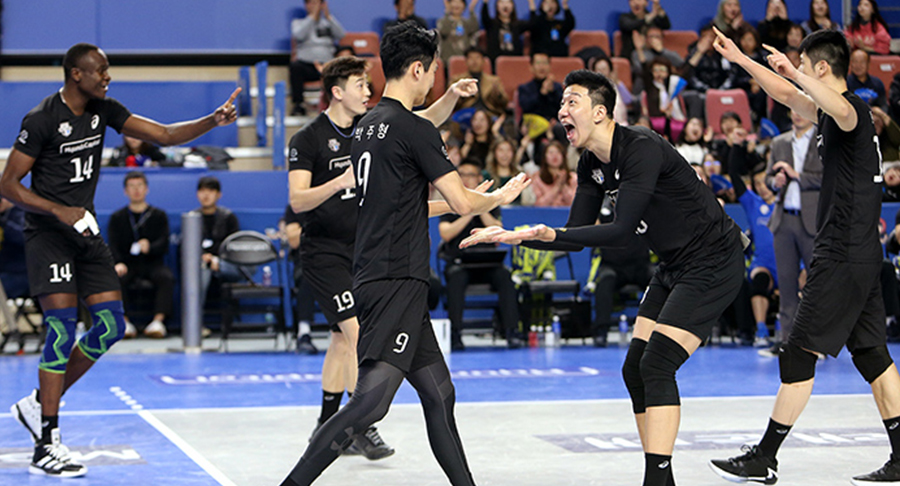 When the lights were out, players started to be introduced. From Hyundai Capital’s star Sungmin Moon to Daudi, pictures of the players who played that day were on the court floor via laser beam. The away team KEPCO players were introduced the same way and fans cheered. When players who were more than 190cm tall entered the court holding a volleyball with one hand, the audience screamed even louder.

Compared to other sports like soccer or baseball, the distance between the audience seats and the court is so much closer in a volleyball game. Fans in the nearest seats on the first floor can actually hear what coaches say to their players. Every time players spiked the ball, you could hear its sound. I even saw staff holding up ‘Watch out for the ball’ sign.

Hyundai Capital defeated KEPCO only in an hour and a half that day. Players stayed in the court and thanked the fans seating in the stadium. Sungmin Moon had an interview on behalf of Skywalkers. When asked what the secret was behind winning the game, Daudi, who scored the most points in the game, said it was teamwork. When I eft the arena and got on the train, it was only 10 pm.

Impossible is nothing: business lesson 101 in India

How I became a Hyundai Card employee