When you come across the news that BTS’ new album is out, do you head out to a record store or open the Melon music streaming app on your smartphone? Did you visit a cinema in your neighborhood to watch Robert De Niro’s “The Irishman” or snuggled into the sofa in your living room to watch the film on Netflix? 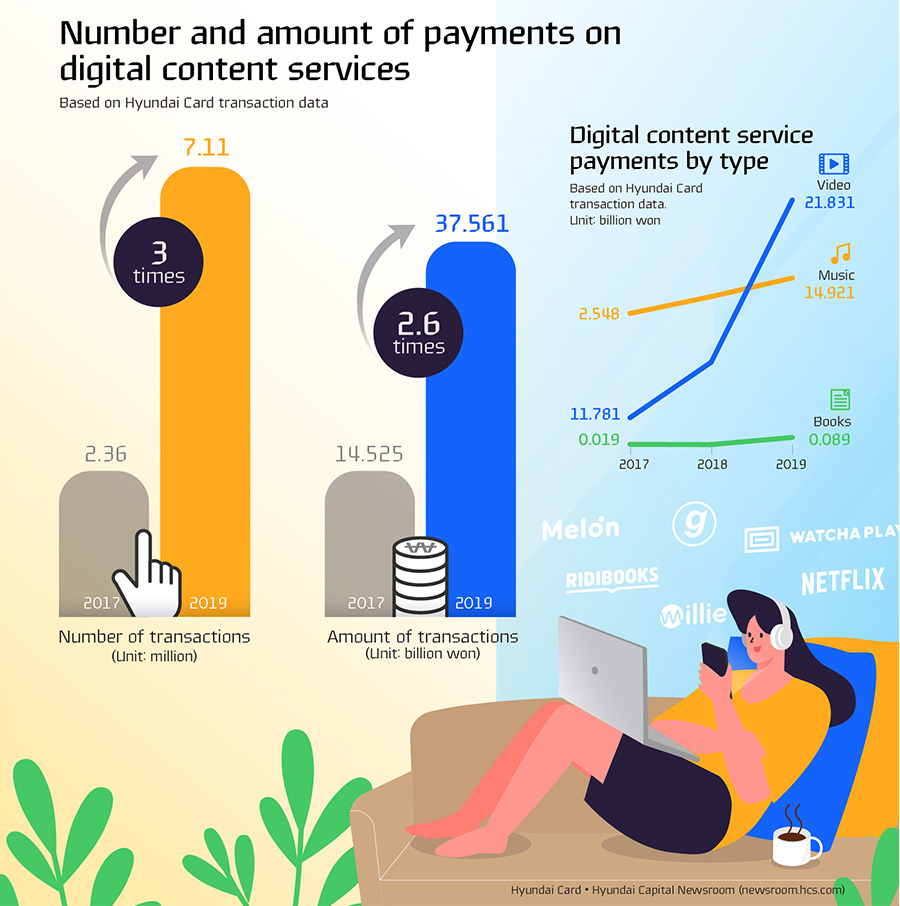 The answers may vary according to your taste but analysis of recent transaction data from Hyundai Card showed that people are increasingly opting for digital content subscription services for music, video and books.

Jointly with Hyundai Card’s Data Analytics Team, Hyundai Card•Hyundai Capital Newsroom analyzed Hyundai Card customers’ payment data at 10 homegrown and foreign digital subscription service providers between 2017 and 2019. In a matter of three years, Hyundai Card customers spent 2.6 times more on digital subscriptions. The amount of accumulated spending that stood at 14.52 billion won in 2017 surged to 37.56 billion won in 2019. The number of transactions more than tripled over the same period from 2.36 million to 7.11 million. That means digital content subscription market has grown immensely over the three-year period in Korea.

That trend is not merely confined to Korea but is a global phenomenon. Notable is that the pace of growth is much faster here. According to Statista, digital content market (excluding games) edged up 1.13 times from $65.46 billion to $73.99 billion between 2017 and 2019, relatively slower than in Korea.

Psychological barrier for paying for intangibles including media content has been high in Korea. People were mostly reluctant to pay for video on demand services and were used to downloading pirated films over the internet. Consuming paid digital content was deemed to belong only to younger generation.

Time has changed now. Hyundai Card•Hyundai Capital Newsroom has taken a look at what propelled the changes and which services people use the most.

Transaction volume from digital content subscriptions also reflects the trend. Among five most paid services in 2017, three were music related such as Melon, Genie Music and Bugs Music. But in 2019 video services such as Netflix, Wavve and Tiving took up three spots, whereas the remaining two were related to music. 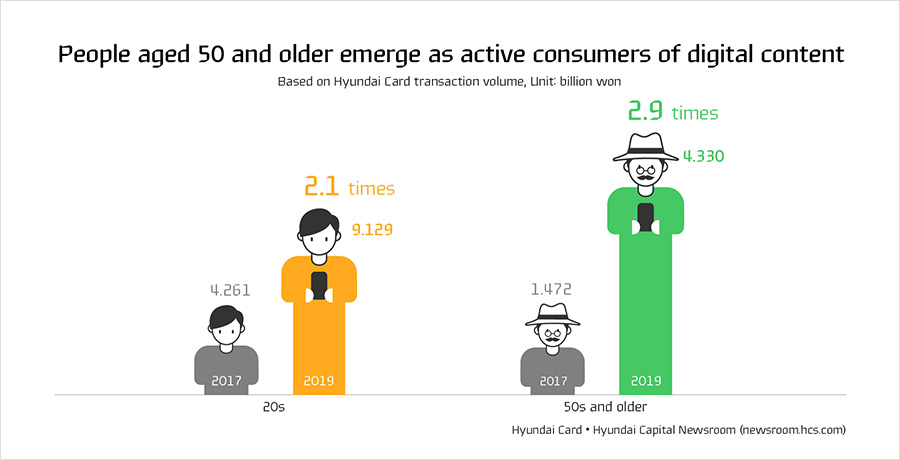 Those aged over 50 who were normally considered to be far from subscribing to digital content are increasingly opening their wallets. Whereas spending by those in their 20s and 30s on digital content rose 2.1 times and 2.7 times each between 2017 and 2020, spending by those in their 50s and those aged 60 or more jumped 2.9 times and 3.2 times over the same time span... By growth margin people in their 60s and older displayed the highest ratio among all age groups.

Noteworthy is the fact that people in their 60s were the most active users of e-book subscriptions. They spent 21 times more on e-books in 2019 than in 2017. Fifty-somethings spent 10 times more on video services over the same period.

Such results show that the popularity of digital content subscription is not limited to the demographic in their 20s, 30s and 40s even though it is true they make up the largest portion.

In tandem with the trend, Korea has seen a series of credit cards targeting digital content subscribers. Hyundai Card also rolled out a new credit card “DIGITAL LOVER,” offers up to 10,000 won discount monthly from expenditure on digital streaming services such as Netflix and YouTube Premium.

“Against the backdrop of recent surge in digital content subscriptions propelled by the popularity of video streaming services,” said a Hyundai Card spokesperson, “we took into account changes in consumer spending trend and life style when designing the card, not conventional elements such as their occupation or income. That led to upbeat response from customers.”

“I am willing to pay for digital content,” say nine out of 10

In tandem with the analysis, Hyundai Card•Hyundai Capital Newsroom conducted a survey with OpenSurvey, a research agency, on 1,000 people aged 20 or over who have used digital content at least once before. The survey showed there has been positive change in the perception of paying for digital content since 2017.

According to the survey, 97.2 percent of the respondents said they think of spending money on digital content positively. Of them 37.4 percent said their perception has shifted from negative to positive. 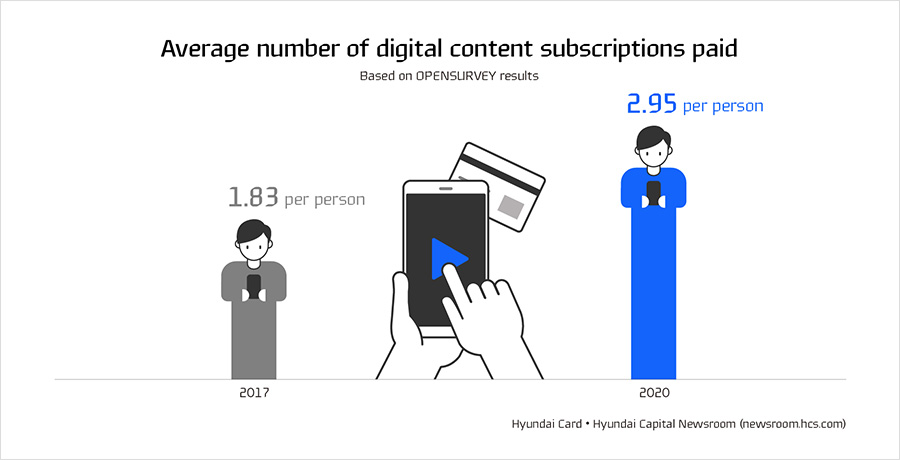 What makes them willingly pay for digital content service now?
PricewaterhouseCoopers (PwC) finds the answer in the “putting the me” phenomenon. According to “Global Entertainment & Media Outlook 2019-2023,” published in 2019, consumers want to exert greater control over “how and when they experience media” by managing their media consumption via various devices including smartphones. Now they can curate their own set of content experiences through their personal selection of channels.

The survey results reflect the trend. The number of digital content services that survey participants subscribe to ascended from an average of 1.83 in 2017 to 2.95 in 2020. Even more interesting is that 39 percent of the entire respondents say they are paying for two more services in the same content category. 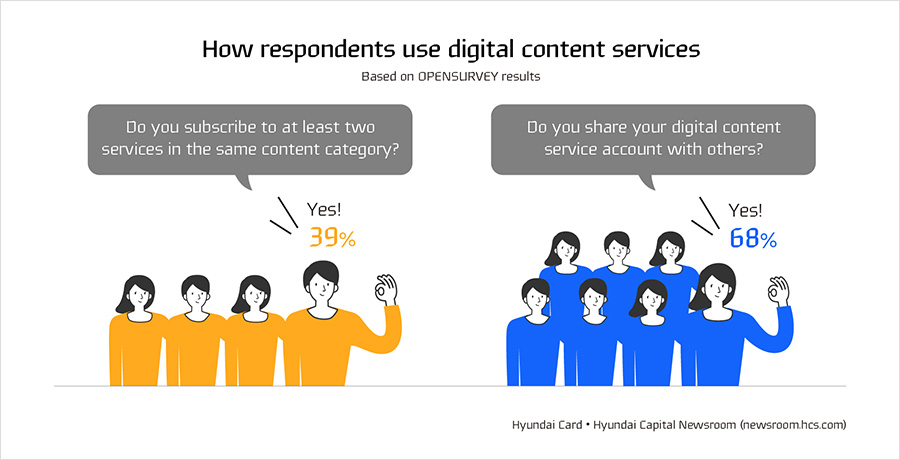 The survey also found that 68 percent of all survey participants said they share at least one digital subscription account with others. As to the reason, 66 percent of those who answered so cited their volition to enjoy more diverse content at reasonable cost.

“Behind the phenomenon of more people subscribing to digital content by even sharing their accounts with others lies the aspiration to enjoy an increased variety of content at time and place they wish,” said the Hyundai Card spokesperson. “Opening wallet for one’s personalized content experience is becoming mainstream.”